Ain and her father will hit back with a lawsuit of their own. 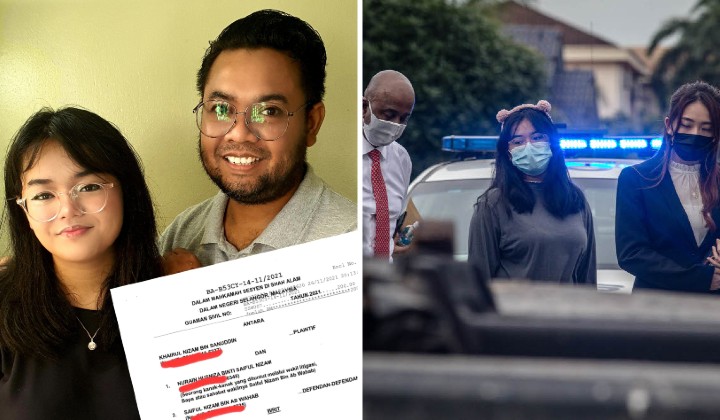 Seven months after the lewd rape joke incident, the teacher who told the joke now is trying to sue Ain Husniza and her father, Saiful Nizam Abdul Wahab.

The RM1 million lawsuit will see both father and daughter as defendants but reports from FMT stated that Saiful will fire back with a RM5 million lawsuit against Khairul.

This was confirmed by Saiful on Twitter saying that they have received the writ of summons and the statement of claim.

Khairul said he was just doing his job

According to the statement of claim, on April 24, Khairul Nizam who is a Physical Education and Health Education (PJK) teacher at Sekolah Menengah Kebangsaan Puncak Alam (SMKPA) touched on a subtopic which was under the Reproductive and Social Health Education (PEERS) subject which teaches students about sex education.

Khairul Nizam, who has been teaching for 21 years at the school, stated that during the learning process, all students must bring and refer to the Form 5 Physical Education and Health Education Textbook.

He denied making obscene jokes or jokes about rape during the learning session and didn’t encourage it, but only used the term as a communication tool in the context of learning.

The plaintiff also mentioned that he had emphasized the effects and consequences of sexual harassment on predators and victims.

However, he claimed that Ain Husniza – the first defendant – had published a video on TikTok which allegedly contained defamatory statements against him.

The first defendant also issued a similar statement about ‘a PJK teacher who also happens to be the disciplinary teacher’ on her Twitter account.

Ain continued to post several videos on TikTok and statements on Twitter the day after which resulted in the dissemination of these allegedly defamatory statements by local and international media.

It was also claimed that the teenager allegedly made defamatory statements against him in a series of interviews including in Utusan Online and Wanita Hari Ini (WHI).

While on 6 May, the second defendant also allegedly made defamatory comments during his interview with Malaysia Gazette TV.

The teacher said the incident has hurt his reputation

Khairul Nizam also claimed that although the two defendants did not mention his name in the videos, all the school staff, Puncak Alam community, and netizens would eventually target him as he was the only discipline teacher who taught PJK in the school.

The plaintiff is also the only male teacher who teaches PJK and is also a discipline teacher who was transferred to the Selangor State Education Department (JPNS) as a result of complaints and police reports made by the First Defendant.

As a result of the actions of the two defendants, Khairul Nizam claimed that his reputation had been damaged, causing the community “to look down on him as if he was a teacher who liked pornography and did not set a good example to students”.

Therefore, the plaintiff applied for a court order for both defendants to delete all defamatory statements against Khairul Nizam on all social media sites belonging to them and third parties.

Khairul Nizam also applied for an injunction order to restrain Ain Husniza and his father from continuing to issue any defamatory statements regarding the plaintiff and both defendants or their agents were prevented from repeating all the false statements anywhere in any form.

The teacher also demanded an apology from the teenager and his father which will be published on all their social media sites and identified third parties as well as in Khairul Nizam’s preferred newspaper.

Plaintiffs are also seeking general damages including damages due to loss of reputation and credibility, extreme damages as well as exemplary damages to be assessed by the Court.

Also sought are costs and other reliefs deemed appropriate by the Court.