Suspect was arrested while making a police report on the incident. 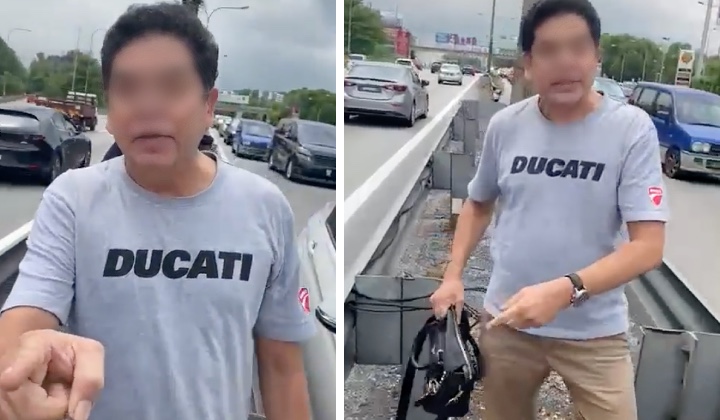 The Chinese have a saying that the older the ginger, the spicier it gets (the older, the wiser).

It certainly applies to a 56-year-old man who was involved in an accident, although in a perverse manner.

Police have arrested him on the allegation of snatching a woman’s handbag in the aftermath of the accident.

Accordingly, the accident involved a vehicle that collided with the suspect’s car at KM14.6 of the Federal Highway heading towards Kuala Lumpur from Klang.

The suspect was detained while at the Shah Alam district police headquarters to lodge a report on the road accident.

The incident happened at about 1.33pm when a woman who was driving a BMW car from Klang towards Kuala Lumpur collided with the back of the man’s Proton Gen 2. The collision caused the 56 -year -old man’s car to collide with a Honda HRV in front driven by a woman.

ACP Baharudin added that an investigation paper on the case has been opened under Section 379 and Section 323 of the Penal Code.

Witnesses or members of the public with information about the accident are requested to assist in the investigation by contacting the Assistant Investigating Officer of the Traffic Investigation and Enforcement Division (BSPT) IPD Shah Alam, Sergeant Hafizi Hashim (013-9557042).

A one-minute and 30 seconds video on the incident had since gone viral on social media.

In the video, a man was seen forcefully taking the woman’s handbag and asked her to follow him to the police station to lodge a report.

The woman berated him for his act and asked him to return the handbag, but the man appeared angry and refused to listen.

A passerby tried to help but it is not clear if they succeeded in defusing the situation, which appeared to happen along a busy highway.

Unsurprisingly, netizens took a swipe at the man for breaking the law.

Whatever the cause of disagreements and disputes, we should not resolve it by breaking the law.

The key is not to fear, be angry or try to avoid conflict but to learn how to resolve it in a healthy way.

Hopefully, the matter could still be settled amicably.