The open space up in Genting Highlands remain a top spot for people looking to have a budget outing. 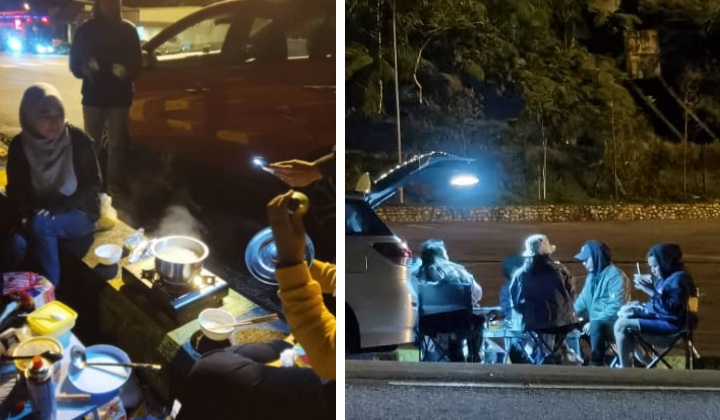 Picnicking has always been a popular activity for Malaysians, especially up in the mountains where the air is cool and breezy.

Naturally, the popular tourist destination of Genting Highlands – that stands at 6,000 feet above sea level – would come to the minds of many.

Renowned for its casino, nightlife and luxury hotels, Genting Highlands is also perfect for picnickers.

Things got a little hand out lately though when outdoor lovers expanded from simple picnicking to tents.

READ MORE: Netizens Not Happy With New Trend Of Setting Up Tents & Hanging Out In Genting Highlands

Following the negative comments from netizens, it is believed that the campers were prohibited by auxiliary police from ‘habituating’ the place.

A recent check by TRP found that the spot, which is near a petrol station in Genting Highlands, remains a magnet for outdoor lovers albeit without the tents.

They were also cooking hot meals by the roadside using portable stoves.

Among them is a group of youngsters who are studying to become teachers at a public university in Tanjung Malim.

They are not aware of the uproar triggered by campers.

We just want to have good clean fun without spending too much.

Meanwhile, a local resident who lives near Gohtong Jaya (a satellite town of Genting Highlands) said the tents would not have sat well with any right-minded management.

The local resident, who only wished to be known as Chen, said businesses exist to generate profit.

He pointed out that Genting Malaysia has invested a lot more money in infrastructure for the public to enjoy, including a new theme park targeted to open in the second quarter of this year.

Just take the First World Hotel in Genting Highlands for example. It’s the world’s largest hotel with more than 7,000 rooms, and you expect people to put up tents as they like? Surely not.