The closure is to allow for essential emergency works to be carried out on the route. 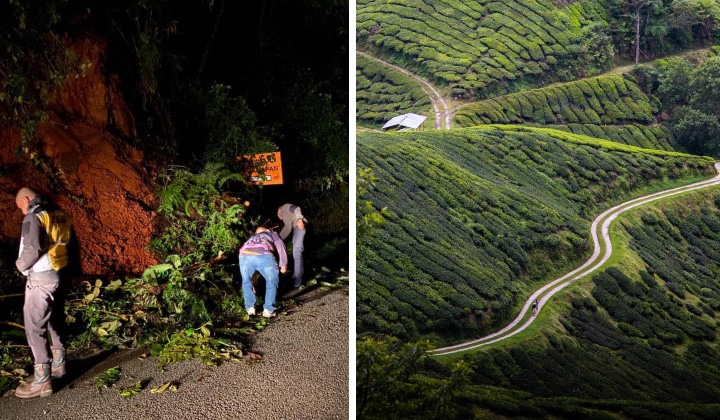 The Tapah-Cameron Highlands federal road is partially closed to all vehicles following a landslide between Batu 25 and Batu 26.

The announcement was made by the Public Works Department (JKR) in a statement today.

The closure is to allow for emergency repair works to be carried out at Section 62.65 of the route.

Cameron Highlands JKR said the road closure will take effect immediately, to a date to be announced later.

Road users are advised to be careful and follow any instructions issued to prevent untoward incidents.

Motorists can use the Jalan Simpang Pulai-Blue Valley heading towards Cameron Highlands as an alternative route.

He said that electric poles fell on both sides of the roads. The incident did not cause any damage to other properties.

Other parts of Cameron Highlands were also damaged after prolonged rains in the region, prompting travel advisories.

READ MORE: Landslides In Cameron Highlands: Tourists Advised Not To Travel At Night

The Long And Winding Road

The Tapah-Cameron Highlands road was completed on 14 November 1930 by an Australian company at a cost of RM3 million and was named Federal Road 59.

The road is indeed full of winding with narrow short turns. Those unfamiliar with the bends will likely vomit.

As the road is built along mountain slopes, it is prone to landslides which damage the road.

There are not many sights and stops except at the Lata Iskandar waterfall in Batu 12.

The route is also noted for the many Orang Asli settlements along the way.

During the fruit season, there will be many stalls along the way including durians and high-quality petai which are indeed plentiful.