Restaurateur accused of failing to submit the relevant documents in time. 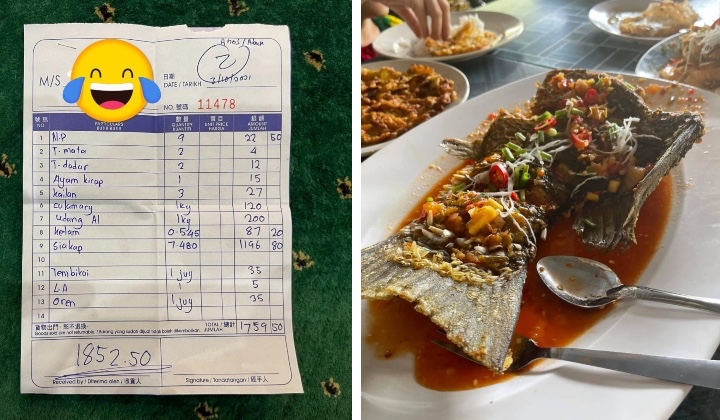 A trader in Langkawi, Kedah who became infamous earlier this month for selling ‘ikan siakap’ (sea bass) for more than RM1,000 will soon face the music.

Kosmo reported that the trader is to be charged under Section 53 (A) of the Price Control and Anti-Profiteering Act 2011, which provides for a fine of up to RM50,000 or a compound of RM25,000 if convicted.

Deputy Minister of Domestic Trade and Consumer Affairs, Datuk Rosol Wahid said the traders involved had failed to submit complete business documents required by his ministry within the stipulated period.

He said the traders involved had given good cooperation to the Ministry of Home Affairs and Consumer Affairs (KPDNHEP).

Unfortunately, they failed to fulfill the instructions to send complete and detailed business documents up until November 17.

Previously, the period for sending the detailed documents involved has been extended to enable the trader to correct the error.

The investigation paper has been opened and will be sent to the Public Prosecutor’s Office for further action, said Rosol when met at the Peradong Food Production Park, Manir in Kuala Terengganu today.

Rosol said the action was imposed due to the trader’s failure to maintain and keep records properly.

It all began when Facebook user Muhamad Faris Zulkarnain shared how a seafood spread – supposedly enjoyed with his family and friends at a local eatery in Langkawi – raked a total bill of RM1,855.20.

Later, another Facebook posting surfaced claiming to be a reply from the Sas Rimba floating restaurant.

Not long later, authorities began to investigate the fishy business.

The operation aims to deter irresponsible traders from manipulating food prices and the weight of food products.