No one in the family had thought of checking mommy’s MySejahtera status. 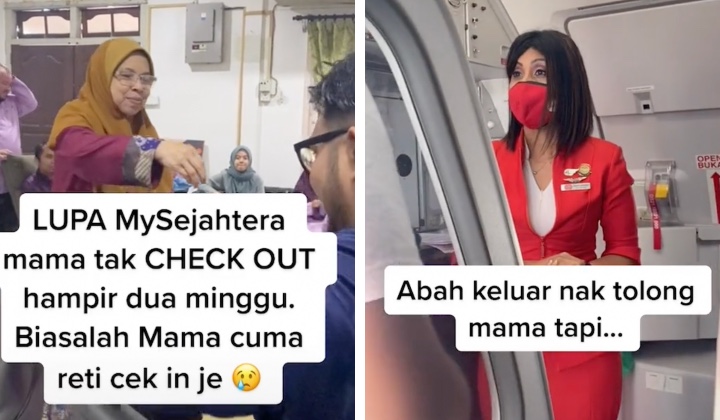 These days, it is not uncommon to hear MySejahtera users forgetting to press checkout in the application.

Most of the time, it is not taken seriously as users can still check out the next time they use the app.

At present, no penalty will be imposed for those who fail to do so.

But the seemingly trivial matter can still land people in an unenviable situation.

TikTok user Eyra Zaharah shared with netizens how her family holiday came to an abrupt end when her mother was not allowed to board the plane.

In the video, she narrated how the atmosphere turned sad for the family when they had to do without mom and dad.

When they were at the airport, the mother’s MySejahtera displayed a red status.

Apparently, she had forgotten to press check-out on the application for almost two weeks.

Eyra Zaharah added that none of their family members had checked on it. At first, they thought the matter could be resolved, but they could not help her mother because her name had already been called out.

The lesson: Check out the MySejahtera app at least a week before going on holiday.

The 45-second video garnered more than 348 thousand views and more than 16,000 likes on TikTok.

The @my_sejahtera team will push a new build tonight making it easier for people to display their risk level and vaccination status – this will ease living with Covid, together.

Will further update and improve the app over the coming weeks. pic.twitter.com/HlClvaA6dQ

Indeed, many users don’t really think too much about checking out of MySejahtera once they have done a check-in.

Some might find it troublesome, as users have to perform it on each location individually.

It will take some time for people to get used to the process of checking out from their location.

Lest we forget, the step is important to help improve the contact tracing process.

MySejahtera’s contact tracing system helps to determine “casual contacts,” meaning those who were at the same time and place as a Covid-19 patient, based on their check-in data.

AirAsia Passenger On Flight To Kuching Tests Positive For Covid-19, Other Passengers Advised To Get Tested