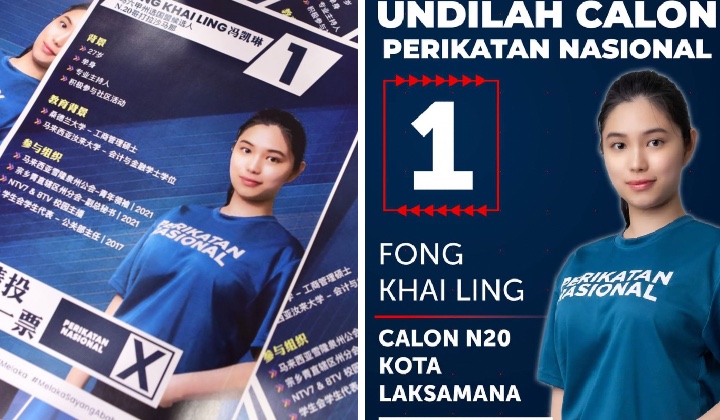 With the Melaka state election around the corner, the battle for votes between Pakatan Harapan (PH), Barisan Nasional (BN) and Perikatan Nasional (PN) intensifies.

Not to be outdone is PN’s young candidate from Gerakan for the Kota Laksamana seat, Karen Fong Khai Ling.

The 27-year-old has been tipped to win more votes. While many would credit this to her looks, Fong is in fact well educated and is very confident that she can serve the community with her knowledge.

A person’s intelligence is more important than those of a person’s attractiveness.

Who is Khai Ling?

Fong is a graduate of Nilai University College, Fong holds a Bachelor’s Degree in Accounting and Finance.

She also has a Master’s degree in Business Administration at the University of Sunderland.

When she was a student, she had been actively involved in the campus student association.

Fong previously worked with Media Prima as a news presenter for NTV7 and 8TV.

She is currently doing her own business in media production and education consultancy.

Come November 20, when voters head to the polls, Fong is not counting on her looks to give her an advantage.

At heart, her vision is to bring the young people back to Kota Laksamana by lifting growth and jobs in the coming years.

Fong, who has been meeting Kota Laksamana people from all walks of life, is confident because people are yearning for change.

She wants to give them a more fair and equitable local economy after decades of struggle especially for low-income and middle-class folks.

What matters for Melaka’s informed voters are what a candidate can do for them.

You have a very good posture.

She was recently criticised for an old video of her providing guidance on how to enter Israel using a Malaysian passport.

She has since apologised and clarified that she has never intention of going against the law.

Fong added that such actions are extremely dangerous and advised people to fully understand the risks.

“I understand Malaysia and Israel do not share any diplomatic ties,” she said.

Israel is one of the countries banned from being visited by the Malaysian government until now.

For years, Malaysians, especially of the Abrahamic faith, has been travelling there via two methods.

They can join a Christian congregation to perform pilgrim or fly from Thailand via a visa from Singapore.