Khairy Jamaluddin said one in two Malaysians, including himself, is obese. 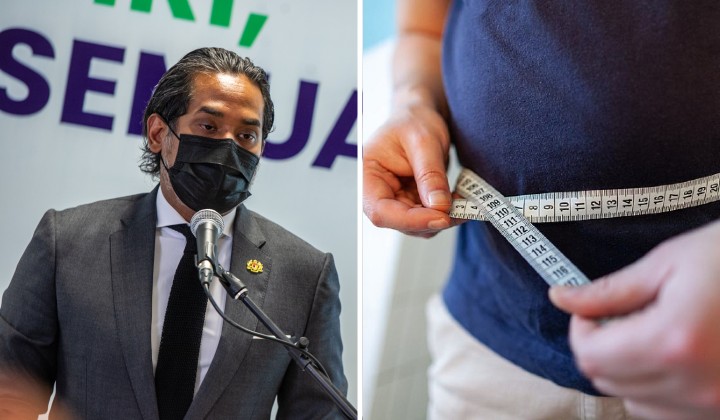 Malaysia is considered an unhealthy country with a significant number of people suffering from heart disease and obesity, said Health Minister Khairy Jamaluddin.

Bernama quoted the Minister mentioning that the public’s awareness on health was still very low.

If you ask me as a Minister, is Malaysia a healthy country now? No. We are among the countries with the highest rate in terms of obesity, heart disease, and among the causes of Covid-19 death in this country, mostly are patients with comorbidities or chronic illnesses. Imagine in Malaysia one in two people are obese including myself, while one in four Malaysians does not practice fitness.

Besides referring to himself as being obese, KJ said that one in 20 Malaysians do not practice proper nutrition habits.

According to official statistics, half a million adults suffer from depression. I believe this figure is actually still lower than reality.

After the launch of the Agenda Nasional Malaysia Sihat (ANMS) national health campaign, Khairy said, Malaysians now need to change their habits and raise awareness to produce a nation of healthy citizens voluntarily without having to rely on his Ministry or the government alone.

He said that behavior change, awareness to undergo self-health examinations, are some of the main focuses of the newly initiated agenda.

If we want to expect the Health Ministry alone to monitor standard operating procedures (SOPs) and issue compounds, there are not enough hands. We want the country to succeed in terms of managing this pandemic.

The Minister cited the example of Japan successfully managing the pandemic through behavior without having to issue compounds or fines.

Meanwhile, Khairy said, a committee will be set up to bring together all the relevant Ministries to report on measures to implement the ANMS at the Ministry level.

He said, apart from taking into account the health factors of the people, the agenda also involved the health of the ventilation quality of new buildings as an effort to prevent Covid-19 which is transmissible through the air.

What is the ANMS?

The newly launched ANMS is promoted as a way to prepare Keluarga Malaysia for the endemic phase and is implemented for a period of 10 years from 2021 to 2030.