Najib Razak was quoted saying that he’s in Melaka for a holiday trip because the state has many destinations to visit, while also meeting up with old acquaintances. 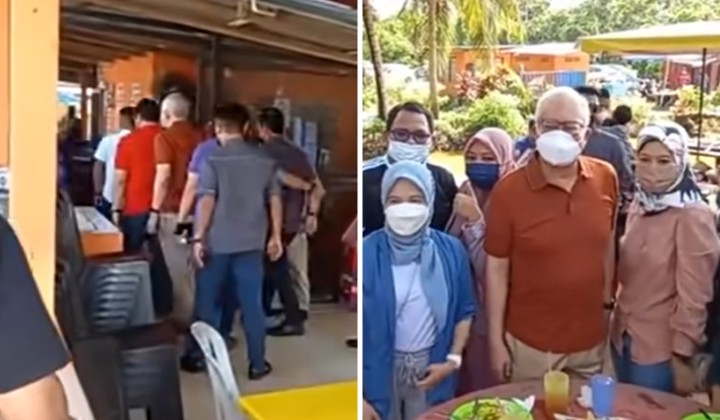 There are days when the trolls win, but today, Former Prime Minister Datuk Seri Najib Razak has the last laugh.

A short video surfaced on social media recently showing a restaurant full of people in Melaka dispersing after Najib and his entourage parked their vehicles next to the establishment.

Naturally, this caused some to assume that the Pekan MP was being shunned by the shop owners who would rather close their shop than serve food the Former Prime Minister.

It turns out that the restaurant didn’t close down after all based on a video by Malaysia Gazette on YouTube.

In the 14-minute-or-so clip, Najib was seen posing for pictures with diners around the premise before grabbing a seat.

Najib was quoted previously by Harian Metro saying that he’s in Melaka for a holiday trip because the state has many destinations to visit, while also meeting up with old acquaintances.

Meanwhile, Berita Harian reported that he went to Pantai Puteri Open Market to buy goods such as fish and vegetables, Kampung Tengah, Bukit Rambai to eat some cendol, and a supermarket in Taman Nirwana, Klebang for some shopping.

Previous reports did say that he was given his passport back to go to Singapore and visit his daughter but he later postponed the trip to help UMNO in the Melaka elections according to The Star.

READ MORE: TLDR: How Ahmad Zahid, Rosmah, Najib And Shafee Abdullah Got Their Passports Back

Here’s Your Candidates For The Melaka State Elections