The Klang River needs TWO Interceptor barges as it’s one of the most polluted rivers in the world. 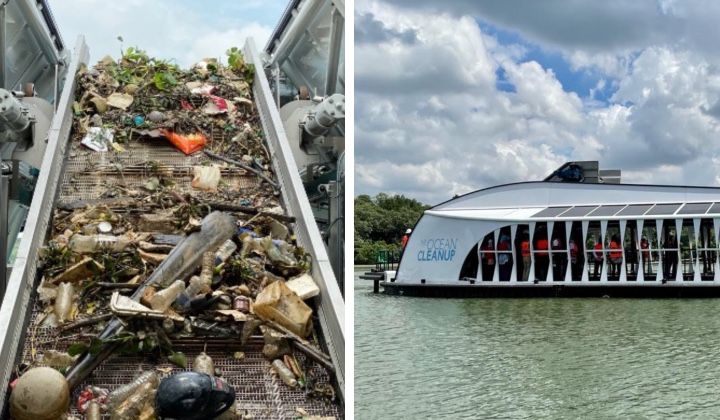 A second Interceptor barge will soon be cleaning up trash in Sungai Klang.

Built by Dutch non-profit outfit The Ocean Cleanup and their supplier MHE Demag in Port Klang; the Interceptor 005 will boost Selangor’s vision to rejuvenate Sungai Klang.

Work on the Interceptor 005 – based on an upgraded design – started in April this year.

It will join its elder sibling Interceptor 002, implemented in 2019 to complement the 7 log booms located along 56km of downstream Sg Klang as part of the Selangor Maritime Gateway (SMG)’s river management solution.

Landasan Lumayan – which partners The Ocean Cleanup in giving the river a new lease of life – announced the good news in a statement.

The local company has been mandated to spearhead the Selangor Maritime Gateway (SMG) urban rejuvenation project.

The SMG project consists of the cleaning, rehabilitation, and sustainable development of Sungai Klang and its areas.

Efforts to clean Sg Klang which started in 2016 by the state have recorded an extraction of over 75,000 MT of waste to date, with an average monthly waste reduction, an indication that the work by the state government, local agencies as well as NGOs is producing results, and prompting renewed efforts to optimise this momentum for even greater outcomes.

Landasan Lumayan said the new Interceptor would soon begin its test phase near the river mouth at Port Klang.

The move is to ensure optimal interception of plastics and other floating debris before entering the sea.

Already, the solar-powered Interceptor 002 has been doing a great job rejuvenating Sungai Klang – cleaning up trash such as handbags, motorcycle helmets, and countless plastic bottles.

Once the barge is filled up, local waste operators will collect the barge, empty the dumpsters, and send the trash to local waste management facilities. The barge can collect 50,000kg of trash in a single day!

According to them, just 1% of the world’s 100,000 rivers are responsible for roughly 80% of the garbage entering the oceans.

It identified Sungai Klang as one of the 50 most polluting rivers globally, and hence the river was chosen as one of its starting points.

Other Interceptor siblings are also hard at work in different parts of the globe.

Interceptor 001 has already been cleaning up rivers in Jakarta, Indonesia, since 2016. The other Interceptors are meant to be installed in the Mekong River in Vietnam and the Santa Domingo in the Dominican Republic.

Despite the presence of the Interceptors, the public should not rest on its laurels.

Prevention of waste and pollution should be the priority for the community.

The Interceptors are simply to clean up the trash that has already reached our rivers and oceans – but that source of garbage should be stopped before it even comes the water.