They said discussions have been on-going for 5 years but there’s still no improvements. 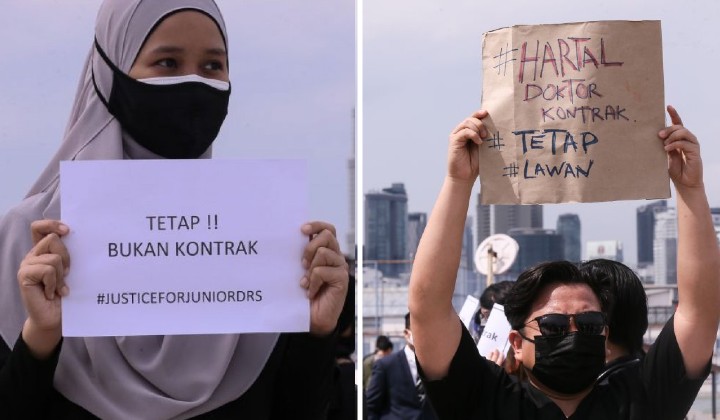 They said that the contract doctors issue and the problems of our health system, which will ruin the future of the public health, is apparently not taken seriously by the Finance Minister.

Gerakan Hartal Doktor Kontrak feels that no full responsible measures have been taken by the government to solve this problem. The offer given is ridiculous and is just a waste of time.

They’ve also criticised the Health Ministry which they say didn’t object to the Finance Ministry on this issue to defend the rights of contract doctors, saying that there’s still no solutions after 5 years of discussions.

The promise of permanent appointment with EPF that is often mentioned as just a bait for us to stop talking. After 2 years of contract doctors battling hard against Covid-19, their sacrifices remain unappreciated. With this we from Gerakan HDK declare Hartal Doktor Kontrak 2.0 will be carried out as a sign of protest.

Previously, around 20,000 healthcare workers have joined together in solidarity to protest against the mistreatment of contract doctors.

READ MORE: Malaysian Doctors Protest Despite Being Warned Not To

This is hard. But needs to be done. pic.twitter.com/sK5L1QRLiT