Why is everyone mad about the new movie and what’s the deal with egg fried rice? 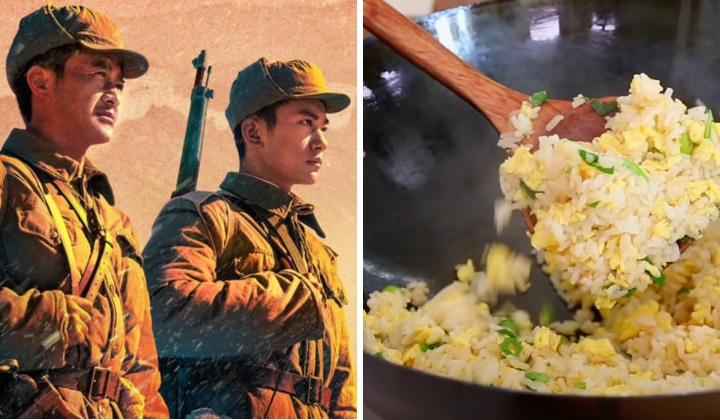 A three-hour blockbuster on communist heroism during the Korean War in the 50s has drawn the ire of Malaysians, especially among the Chinese community.

The Battle of Lake Changjin – starring Chinese action hero Wu Jing and Jackson Yee – was produced in conjunction with the 100th anniversary of the Chinese Communist Party this year.

The teaser of the movie – which depicted two People’s Volunteer Army soldiers – was shared by Golden Screen Cinemas (GSC) on social media recently and drew various reactions from Malaysians.

Taking to social media to voice their unhappiness, they slammed the movie as nothing more than propaganda and is only suitable for Chinese audiences in China.

Critics also poked fun at the phrase ‘Mao Anying’s signature fried rice’ because of the movie.

Killed in action during the Korean war, Anying was the eldest son of Mao Zedong, founding father of the People’s Republic of China.

It had been rumoured that Anying died because he cooked egg fried rice during the war, which exposed his position to the enemy.

Coincidentally, the CCP launched the Battle of Lake Changjin after Anying’s death on November 27, 1950.

At the same time, critics also pointed out that in 2013, the controversial film The New Village was banned.

The movie, which depicts the lives of Chinese citizens during the Malayan emergency, was banned on grounds that it appeared to glorify the Malayan Communist Party (MCP).

It has also been accused of trying to alter historical facts by portraying the violence committed by the British.

Based on the same reasoning, the LPF (Film Censorship Board) should block the Battle of Changjin Lake from being shown in the country.

What happened in Battle of Changjin Lake?

The movie depicted a 17-day key battle fought between China (in aid of North Koreans) and United Nations forces led by the Americans at Chosin Reservoir.

Despite numerical superiority in manpower, the Chinese were up against impossible odds as the Americans were much better equipped.

In the movie, Chinese soldiers were eating frozen potatoes while the Americans were enjoying roast turkey and bacon.

According to Chinese entertainment platform Maoyan, the movie will be the highest-grossing film worldwide in 2021, with more than 5.47 billion yuan (USD854 million).

The box office hit was released on Sept 30, just before China’s National Day.

It dominated China’s movie screens during the seven-day holiday known as Golden Week.

It would be wise not to complain or joke about the movie in China though. Such actions would be deemed as misleading the public and insulting the CCP’s image.

People in China have been detained for criticizing the government-sponsored ultrapatriotic war movie because they insulted the reputation of heroes and martyrs.

A journalist, Luo Changpin, was detained for saying that China should not have intervened in the war.

Another Chinese citizen was detained for saying that the best thing that came out of the Korean War was egg fried rice.

China also shut down the social media account of a branch of the telecommunications giant China Unicom after it posted a recipe for egg fried rice to mark the Oct 24 birthday of Mao Anying.