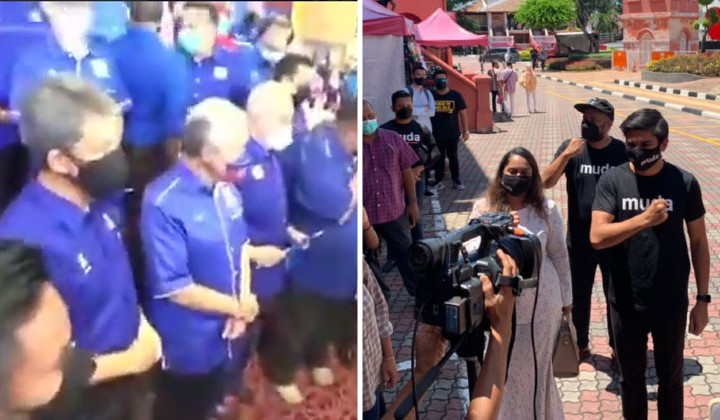 Two political parties have been handed compounds by the Health Ministry for gathering in large crowds yesterday.

One party is Barisan Nasional for their launch event in World Trade Centre Kuala Lumpur (WTCKL) while the other party is the Malaysian United Democratic Alliance (MUDA) who were doing a press conference over in Melaka as they gear up for the upcoming Melaka State Elections.

Previously, the Health Ministry has banned gatherings related to the election from 25 October up to 27 November, The Edge reported.

MUDA was given a RM4,000 fine after holding a press conference related to the Melaka State Election (PRN) at the Stadthuys building, based on reports by Astro Awani.

It’s also reported that the compound was issued following the event.

The police have advised the organizers to stop the program because the SOP of the National Recovery Plan (PPN) Phase 4 dated October 24, which prohibits any program related to the Melaka PRN from October 25 to November 27. But he did not cooperate and continued the press conference which resulted in an estimated 30 to 40 people gathering.

After MUDA was given their compound, it was Barisan Nasional’s (BN) turn to get a RM10,000 fine for violating PPN Phase 4 standard operating procedures (SOPs) when party members gathered in WTCKL for the party’s Melaka State Election (PRN) machinery launch.

The Health Ministry (MOH) said on Twitter that the fine was issued by the Kepong Health Office for violating Act 342 along with the compound letter issued to the party.