The accused was a senior officer at the Sabah Wildlife Department’s rescue unit. 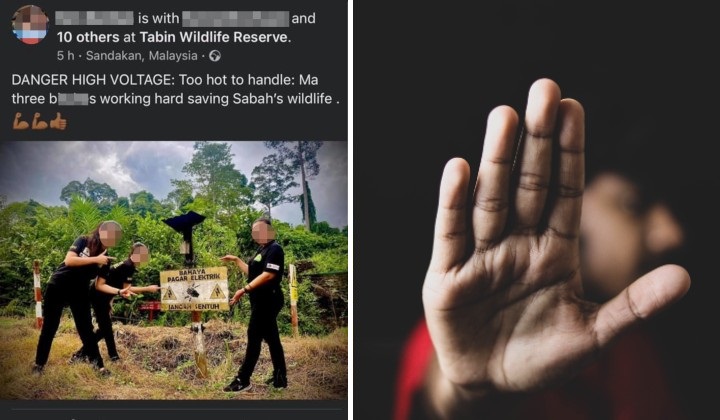 What started as a “joke” by a senior officer at the Sabah Wildlife Department (SWD) has now escalated into a case of sexual misconduct and misappropriation of funds.

The whole debacle began with a recent Facebook post by the man in question that featured three of his female colleagues and a lewd caption:

The man later apologised but his behaviour prompted a former colleague of his to step forward.

Facebook user Carolina Zu, the ex-colleague who resigned in 2019, took to social media and shared her resignation letter in which she claimed a toxic work environment under the senior officer’s management.

If anyone has ever wondered why I never complained or said anything about my horrible time at the Wildlife Rescue Unit. Guess what? I did and no one cared, even after Diana took her own life working for this hell of an organisation

The 4-page resignation letter was dated 5 July 2019 and was addressed to Tuan Augustine Tuuga, Director of the SWD.

It detailed various accounts of the senior officer’s misconduct including several instances of misappropriating funds meant for SWD’s Wildlife Rescue Unit (WRU) but were used to entertain guests and staff instead of on rescue operations.

According to Carolina, employees often had to pay out of pocket on missions.

She said that the department owed one of her colleagues approximately RM10,000. The debt remained unsettled when he left the company in 2018.

Those who work at the WRU also had to send daily selfies in the work’s WhatsApp group. Anyone who refused will be called out and told off by the senior officer, added Carolina.

The senior officer would then publicly harass female staff with inappropriate comments, and sexual innuendos.

The senior officer in question is now being investigated for his lewd remarks on social media.

A coalition of 38 civil society organisations and 289 individuals have also petitioned the state government to take firm action against him and probe allegations of embezzlement at WRU.

State Tourism, Culture and Environment Minister Datuk Jafry Ariffin said the matter was being viewed seriously and that disciplinary action was being taken against the senior officer for his remarks on Facebook.

The department is also looking into claims of misappropriation of funds although said that matter had been previously investigated and there were no complaints by donors over the use of funds.

The ministry will never compromise and will take stern action against any staff who takes advantage and abuses their position.

The senior officer has since been relieved of his duties.