They even have their own 15 year old “mechanic” who does the repairs and sells the spare parts. 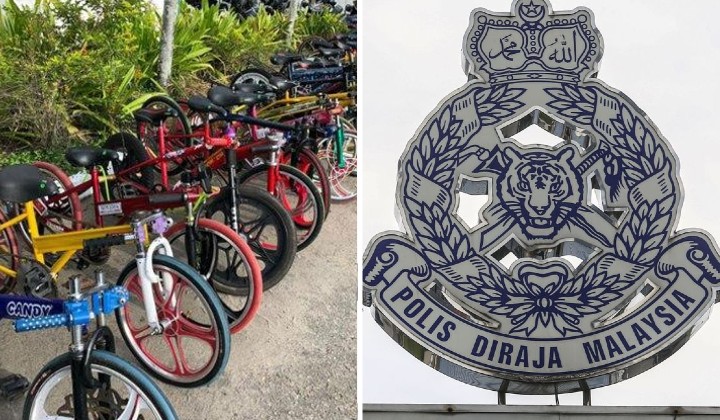 Police have detained eight boys between the age of 10 and 15 for riding their “basikal lajak” in a dangerous manner recently, according to Johor Baru Utara Deputy OCPD Superintendent Fariz Ammar Abdullah.

It’s reported that the incident happened in two different locations in the Johor Bahru district.

He was quoted by Bernama saying that five of them were caught in Kampung Jaya Sepakat at about 6.30pm on 15 October, while the others were caught at Jalan Laksamana, Taman Ungku Tun Aminah several hours later.

Following inspection, it was found that the bicycles had been modified and did not follow specifications. Following which, the boys were taken to the Traffic Branch of the JBU police headquarters for questioning.

They even have their own mechanic

After interrogating the teens, police revealed that one of them – a 15-year-old – is the mechanic or ‘foreman’ responsible for the tricked out bikes.

It’s also pointed out that many customers came to the teenager’s house for repairs as well as to buy spare parts.

The police then contacted their guardians and parents who were briefed on the dangers of these bikes as well as the consequences in the event of an accident, according to reports from KOSMO.

It’s reported previously that parents and guardians who fail to ensure that their children do not take part in basikal lajak activities can be fined up to RM20,000 or jailed for up to five years or both.

READ MORE: Basikal lajak: Parents can be jailed for up to five years or fined RM20,000

Besides seizing eight “basikal lajak”, the police also managed to bring in two motorcycles suspected to be used in the activity.

Fariz said that summons have been handed out against the motorcyclist involved because he did not have a driving license.