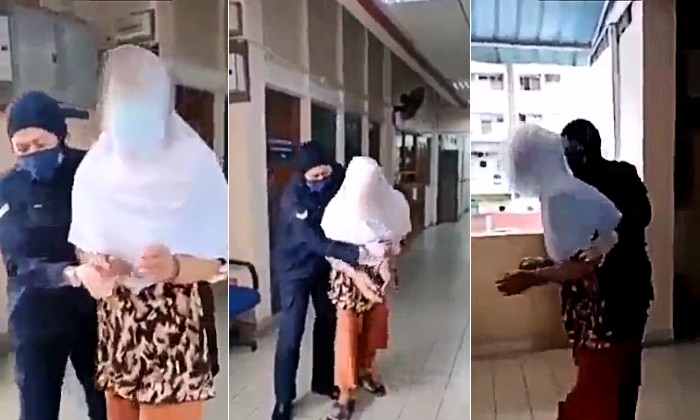 Netizens are discussing the merits of Malaysia’s capital punishment system after a single mother of nine children was given the mandatory death penalty by the Tawau High Court in Sabah on Friday (15 October) for drug distribution charges.

55-year-old fish seller, Hairun Jalmani, was sentenced to the gallows by Judge Alwi Abdul Wahab when the prosecution established ‘prima facies’ or probable evidence against the accused, while the defence was unable to raise reasonable doubt in the case.

Hairun was charged with possessing exactly 113.9 grams of syabu or methamphetamine at a residence in Kampung Pangkalan Wakuba, Tawau in January 2018.

Heartbreakingly, video footage of the mother falling into emotional disarray following her sentencing was released to the public.

The 45-second clip saw the mother in handcuffs and breaking down in tears as she’s escorted away from the courthouse.

A look through the comments section showed that some people did agree that the death penalty was a just and unprejudiced punishment to be given towards drug offenders.

They say that such cases serve as a valuable lesson for the public to stay away from drugs and crime, while others moved to protest against such inhumane punishment, saying that it was unfair and unnecessary in our modern world.

She got what was coming for her. https://t.co/OjXtyF2zG5

Many likewise argued for the abolishment of the death penalty, seeing how the law may be flawed at persecuting marginalised and underprivileged groups.

Malaysia needs to abolish the death penalty – especially for crimes of desperation.

There is no credible evidence that the death penalty deters crime more effectively than a prison term. In fact, crime figures from countries which have banned the death penalty have not risen. https://t.co/x4GCjRfBSG

Why the hell is the death penalty still a thing? Why is it okay for the state to confiscate your right to life? A majority of drugs are bad, definitely. But killing the dealer? A bit much, yea https://t.co/3W8otB1mCs

How many people has “don’t do drugs” murdered? Without understanding how the cycle of poverty creates demand, or that drug abuse is a health issue. Maligned and outdated drug laws are systematically failing the poor and sick. https://t.co/YVRH984Lzb

People also conveyed their opinions of how topsy turvy the country’s legal system was when people were being sentenced to death for what they perceive as petty crimes as corrupted individuals still remained at large for major malfeasance.

what happens to her 9 kids then? what would they do to make ends meet one day? in no way am i justifying drugs & dealing but go after the kingpins, the ones who get to choose the life they live. this mother clearly was desperate and had no other choice. https://t.co/iTJgBwPFDp

Imagine defending the death penalty over a single mother of 9 for a lone drug offense, while an exposé account is blowing up on Twitterjaya for unmasking every single police chief, Dato, and politician who’s avoided that same penalty operating entire drug syndicates.

Malaysia’s criminal justice system is internationally famous, but not in a good way.

A 2018 report by the international Human Rights Watch (HRW) organization said that our justice system was considerably flawed and has a long record of unjust investigations, arrests and detentions.

HWR had listed down a few of our country’s laws which it said were unfair and against human rights. Among them were the Prevention of Crime Act 1959, the Prevention of Terrorism Act 2015, the Security Offenses (Special Measures) Act or SOSMA, and of course, the country’s mandatory death penalty.

Meanwhile, Amnesty International in its report says that Malaysia has a very sketchy record when it comes to handling our accused criminals.

From allegations of torture and other ill-treatment to an opaque pardons process, it’s clear the death penalty is a stain on Malaysia’s criminal justice system

In Malaysia, the death penalty is handed out for 33 different offences including murder and drug trafficking charges.

Read More: Malaysia Joins UN’s Human Rights Council Even Though We’re Not Really Great At It