The fire at Kek Lok Si was quickly put out, otherwise we would have lost a beloved Malaysian cultural icon. 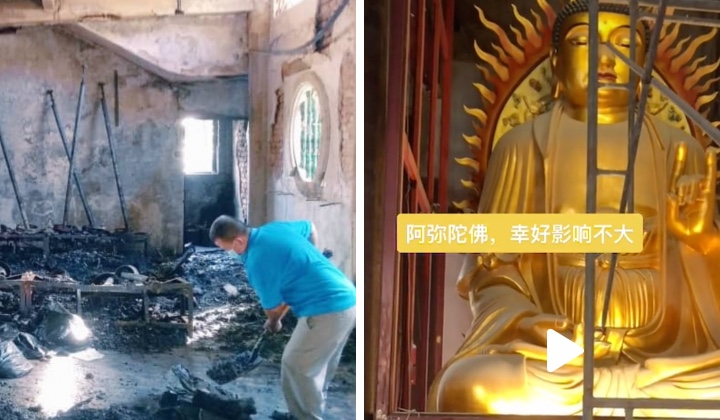 Fire is a significant hazard affecting cultural heritage assets around the world.

The latest victim is the famed Kek Lok Si Temple on Penang Island, ravaged by a fire at around 2 am on Tuesday (12 October).

The blaze is believed to be caused by oil lamps placed on wooden tables which caught fire.

The media quoted temple abbot Master RiHeng saying that he was awakened by the fire and tried to put it out with his staff.

The fire was quickly put under control. After the arrival of firefighters, they continued to put out the fire.

He added that the fire only affected one per cent of the whole area of Kek Lok Si, and the temple will remain open to the public.

Thankfully, no injuries or deaths were reported.

The spacious temple, perched on a hillside, provides stunning views of Georgetown.

Kek Lok Si is an essential place of worship for both Taoist and Mahayana Buddhists.

The temple becomes an impressive sight during Chinese New Year when thousands of lights and candles light up.

It exudes a serene atmosphere that is markedly different from the hustle and bustle of George Town.

If you can’t time your visit during Chinese New Year, try visiting the temple at sunset for an incredible photo opportunity.

For The Love Of Buddha

Driven by the need to build a shelter for Buddhists in Penang, the chief monk of the Pitt Street Goddess of Mercy temple proposed and helped raise funds for Kek Lok Si.

The foundation stone for Kek Lok Si was first laid in 1893.

The temple opened in 1905 with 70,000 copies of the Buddhist Sutra from the Qing Dynasty’s Guangxu Emperor.

The pagoda is officially named the “Rama VI Pagoda”  after the Siamese king who laid the foundation stone.

At 291 feet tall, the pagoda is an iconic image in Penang. Inside, the ongoing patronage of the Thai Royal Family is represented by a Buddha statue donated by the late King Bhumibol Adulyadej.

In 2002, a 100-foot-tall statue of Kuan Yin was added. An intricate shelter was later built around the figure.