Despite calling them out on their irresponsible behaviour, Dr Noor Hisham did not say if he will take any action against them. 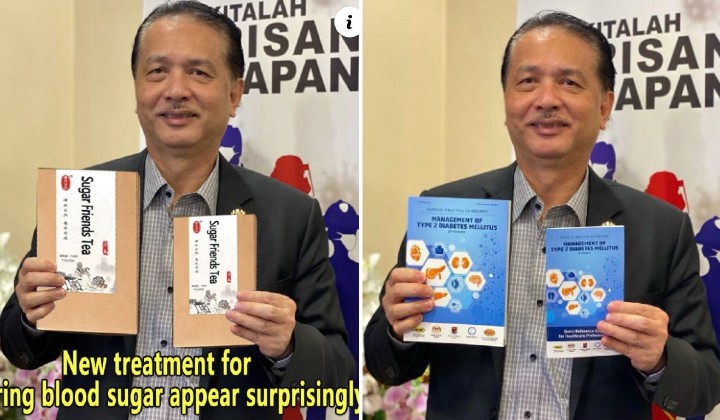 Health Director-General Tan Sri Noor Hisham has come out on social media to address irresponsible parties who use his image to sell their products.

He uploaded two photos, first the edited version which appears to be badly edited with the DG somewhat holding two boxes of “Sugar Friends Tea” along with the caption “New treatment for lowering blood sugar appear surprisingly!”.

Dr Noor also posted the original photo which is actually a picture of him holding the sixth edition of the “Managing of Type 2 Diabetes Mellitus” book that was launched earlier this year, according to reports from The Star.

Although he posted the photos and said that his image was misused, Dr Noor didn’t mention about taking legal action on those who are responsible.

The fake photo by the irresponsible to promote their product and the original photo pic.twitter.com/c6hkVGENLo

Netizens were quick to react to the post, with some pointing out that this usually happens to good looking folks where their photos will be misused for advertising and marketing purposes.

Meanwhile, others were a bit more stern, urging the Health DG to sue the irresponsible parties so that they will learn their lesson.