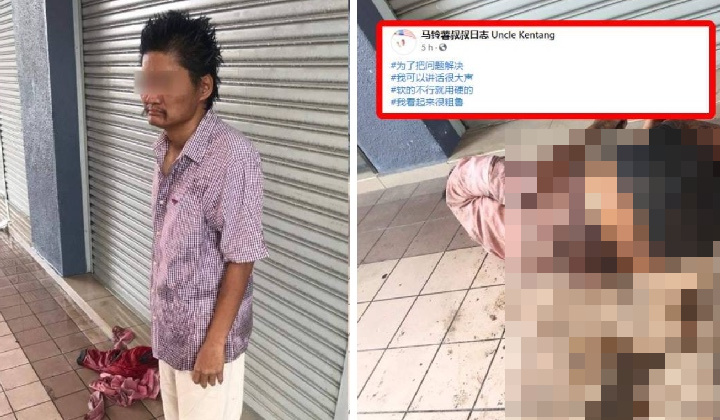 A hero of the masses in many people’s eyes, he did something “disgusting” just a few days ago.

According to Uncle Potato’s Facebook post, he recently dealt with a case of a homeless man who defecated in front of someone else’s shop.

Making things worse was that man was lying in front of the shop after he messed up the place.

Kuan and his team of helpers arrived at the scene after being tipped off by the public.

According to his post, no matter how they shouted, they couldn’t afford to get the man to co-operate.

Even when they needed to clean the ground, the man was unwilling to stand up and move out of the way.

This led to Uncle Potato using the “hard way” to deal with him”.

Kuan scolded him in a loud voice, which drew the attention of passerby.

They criticised him for being rude to the man.

In response to this matter, Uncle Potato mentioned in the post:

I have my way of handling matters. I know when to be polite and gentle.

I can’t please everyone. To solve the problem, I will continue to do what I think is right.

In the end, they managed to convince the man to get onto an ambulance and seek further treatment at the hospital.

At the end of the posting, Kuan emphasized that: “This road (community servicing) has never been easy. My team and I will continue to do what is needed,” said Kuan.

He also thanked the public for supporting him and his team all the while.

Meanwhile, the homeless man had no identification with him.

However, he is likely to be a Malaysian as he had a BCG scar on his arm.

Kuan and his team are arranging for the man to get identity verified at the National Registration Department.

Despite the criticism against Kuan’s method of handling the man, many netizens still agree with his approach. What do you think?