The state constitution says that an election must happen within 60 days. 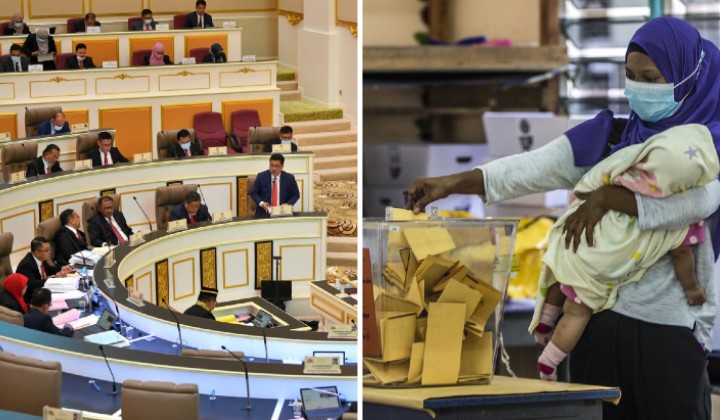 Based on reports, both sides of the political divide are ready to face against one another but with the country still struggling with Covid-19, the people of the state would rather not have an election instead.

Here’s what’s going on so far.

Reports have confirmed that Melaka Governor Tun Mohd Ali Rustam has given his consent to dissolve the state assembly on 4 October.

Malay Mail quoted Melaka Assembly Speaker Datuk Seri Ab Rauf Yusoh who said the decision has been gazetted and a state election will be announced soon by the Election Commission.

It’s also reported that Sulaiman himself sent a letter asking for a state election.

FMT reported that the Election Commission (EC) has received the notice from Melaka, with its Secretary Ikmalrudin Ishak saying that an election must be held within 60 days, citing Article 19 of the state constitution.

Due to this, the EC will hold a special meeting to discuss the election. The date for the meeting will be informed later.

The decision to hold the Melaka State Election (PRN) will be decided after examining all aspects of security and risks, according to Senior Minister (Defense) Datuk Seri Hishammuddin Hussein.

He was quoted by Sinar Harian saying that the government would first need to get the perspective of the National Security Council (MKN), the Election Commission and the Health Ministry (MOH).

We learned from what happened in the Sabah PRN and we saw the impact. Our agenda is to save the people. The EC will decide after we bring it to the top leadership. I have directed the NSC to approach the relevant parties, including the MOH.

MOH coy on elections during pandemic, but is prepared for the worst

The Health Ministry has advised for the polls to be put on hold, but mentioned that they will be prepared for the worst situation if Melaka decides to still go forward with the election.

We are prepared for the worst situation.

UMNO, Bersatu wants to get rid of defectors

UMNO President Datuk Seri Ahmad Zahid Hamidi said those who betrayed the Melaka state government will be given the boot as a result for their action.

He was quoted by The Star saying that elected representatives, either ADUNs or MPs, should be loyal to the party and there are consequences for doing otherwise.

I hope the assemblymen from the party who betrayed the state government led by Barisan and Umno are ready to receive a letter of termination from the party.

The Barisan Chairman also reiterated that UMNO would continue to support Sulaiman Md Ali as head of the caretaker Melaka government.

Barisan Nasional (BN) Melaka is considering a proposal to team up with Perikatan Nasional (PN) in the state election.

Its chairman, Datuk Seri Abdul Rauf Yusoh was quoted by Berita Harian saying that the proposal would be scrutinized before it’ll be brought to the party’s highest level.

We welcome the proposal by the state PN chairman, Datuk Mohd Rafiq Naizamohideen yesterday for BN and PN to establish political cooperation in facing the PRN. I really appreciate the wish and will raise this matter for the party’s consideration in the near future.

PH says bring it on

Declaring a state of emergency to postpone the state election (PRN) will only create a negative perception and adverse effects on the state and the people, said Melaka Pakatan Harapan (PH) Chairman Adly Zahari.

He was quoted by KOSMO saying that because Melaka has just entered Phase 3 of the National Recovery Plan (PPN), it should not take backward action that will damage the economy.

Adly also mentioned that it is not fair to say that the Proclamation of Emergency aims to protect the people while it has the opposite effect.

Putting Melaka in a state of emergency due to political instability is a bad thing. The state PH consensus remains the same and is ready to return the mandate to the people. It’s just that we are very saddened when the current government that has lost faith does not use the correct constitutional lines and processes, to restore the people’s mandate.

The people of Melaka are scared that the Melaka State Election will mean an increase in Covid-19 cases which will ultimately affect social and economic activities in the state.

Based on surveys made by Sinar Harian, they found that the average resident would rather postpone the election after looking at what happened to Sabah elections last year.

It’s reported that 88.5% of the adult population in the state have completed vaccinations as of Tuesday.