Some of them are memorable games Malaysians used to play as kids before the age of smartphones. 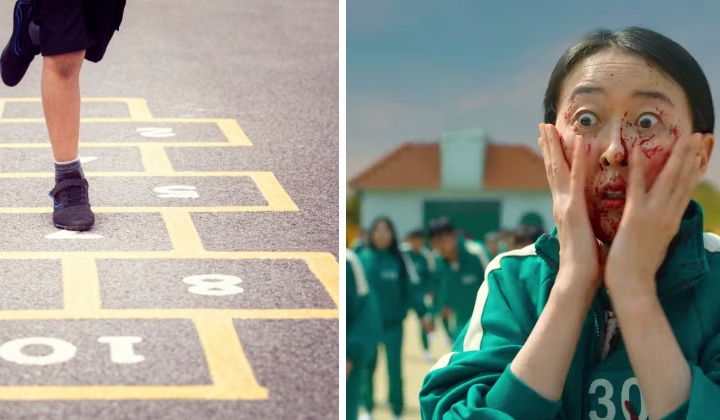 The Squid Game drama series from South Korea on Netflix is all the rage at the moment.

The drama is themed on a survival game with 456 players who aim to grab a cash prize of 45.6 billion Won.

It is so popular that “#SquidGame” has been viewed more than 22.8 billion times on TikTok.

But, did you notice that many of the games in the drama are what Malaysians used to play in their childhood?

Today, many children do not even know these games. Most of them are busy with mobile phones, which are the most important thing in life.

They are unlike the kids in the 80s and 90s, who spent their time outdoors. Back then, having fun means playing out there in the field without fear of sun burn, or hanging out until forgetting to go home and ended up being scolded by mom and dad.

So, let take a trip down memory lane and relive the good old days.

Red Light, Green Light: This is the game where players need to move fast to get to the finish line, but the challenge is that there will be a phrase uttered for a few seconds, and participants are only allowed to move while the words are being said out.

Tug of War: One of the all the time classic games where two teams square off against each other in a test of strength. Each team tries to pull the rope as hard as possible so that the opposing team crosses the boundary line. Teams that cross the boundary line are considered losers.

Marbles: The game of marbles is a popular traditional game. The basis of the marbles game is to throw one’s marbles, targeting other marbles within a circle. The goal is to rid the opponents’ marbles from the circle, and the winner gets to keep the losers’ marbles.

Hopscotch: Known locally as ketingting, this game is played within a relatively small court. Girls play Hopscotch more often than boys, perhaps due to the game being not very rough. It requires a lot of energy and observation. The court is made by drawing a line on the ground, using powdered chalk or anything that can be used to draw on a paved road. They draw lots before the game starts to determine which player should start the game first using the lai lai li tam plong method.

Meanwhile, here are some games which you can only find in Malaysia

Congkak: Congkak is a traditional Malay game that is often played as an indoor activity or as a competition. Very often, the game is played with rubber seeds or marbles on perforated wooden boards or holes in the ground.

Batu Seremban: This game is a game where small stones are tossed and then received back. The game involves at least two players and is usually played by girls. In total, Batu Seremban has eight stages that players have to go through before being counted as winners.

Konda-Kondi: Also known as Perik Mata, the game requires a sharp mind and a good deal of strength. The players must think of a safe direction to flick the stick and chase the flicked stick to kill off the opponent. Played in an open space, the game consists of two small wooden sticks, one is long and the other is short. Both sticks are round in shape and measure about two cm in diameter. The short stick is called the anak and the long one is called the ibu. Holes are dug to place the long sticks. Wan-to-som (rock – scissor – paper) is to form the teams and also decide which side should play first.

Baling Selipar: The baling selipar (throwing slippers) is a very simple and straightforward game. The first player will throw a stack of slippers using the given slippers. If the first player is not successful, other players will follow until the end of the group. Each player is only given 3 attempts.

Bottle caps: Also known as ceper, this game requires five bottle caps. Most of these bottle caps can be obtained from beverage or soy sauce bottles which are made of glass. The objective of the game is quite simple, which is to collect as many points as possible and you are the winner. But, to play it, a bit of skill like weighing using the hands, and flicking the bottle cap, is required.

Galah Panjang: A game that is played on a court sketched on the ground, galah panjang tests the efficiency of the players in getting past obstacles. The game is played by boys and girls and the number of players can be up to ten people. The courts are formed according to the number of players playing long pole. For example, if there are 10 players, the court contains 4 rows.

Gasing: Gasing (spinning top) is often associated with people in the east coast of Peninsular Malaysia especially Kelantan. There are various types of gasing in Malaysia such as gasing jantung, gasing piring or leper, gasing kelamar, gasing telur, gasing berembang, gasing Melayu, gasing Cina, gasing buku benang and gasing pinang. This game can be played one-on-one or in groups. In a one-on-one game, the player with the longest spinning top is the winner.

When looking back to these beautiful memories of the past, one cannot help but feel very nostalgic or even homesick.

Perhaps, the Squid Game is a timely reminder to preserve and pass our very own Malaysian childhood legacy to the next generation.