Malaysians could not forget and forgive what Syakir preached. 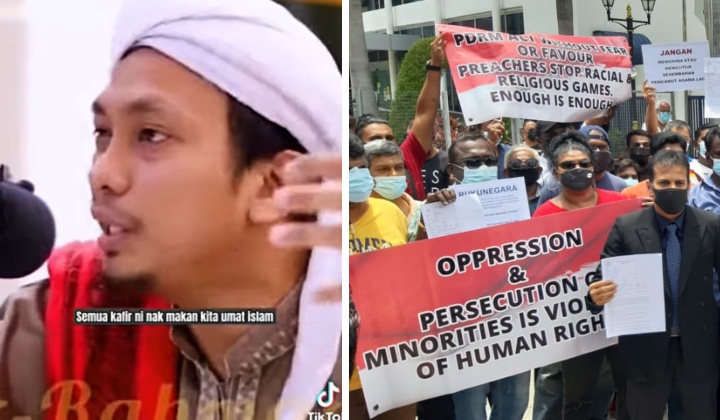 The dark is rising for controversial preacher Ustaz Syakir Nasoha who said he’s been misunderstood.

Syakir made headlines for saying that non-Muslims are clamouring to kill Muslims.

On Tuesday, he came out to give his side of the story after a storm of protests and complaints from Malaysians, as well as more than 3,000 police reports.

He said his speech was only intended for Muslims. Syakir added that someone was out to destroy his reputation by uploading a clip of his sermon which went viral.

Syakir pointed out that the clip only contained selected parts of his 2017 sermon.

However, his defence only appears to have made things worse.

Syakir must be held responsible for delivering a toxic slurry of hate against other religions, said the human rights activist.

“It’s not enough to hope he will correct his behaviour. He must be arrested.

“It’s been 72 hours already since the first report was made, and until now there’s no update whatsoever from the police,” he told The Rakyat Post when contacted.

Shashi claimed that Syakir’s “hateful messages which are full of stupid and easily disproven lies”, were repeated in a Facebook live session on Oct 1.

The content had been removed at the time of writing.

Among other things, Syakir said he could not respect other religions as they are false.

Who teaches us to respect other religions? You cannot respect (them). We can respect them as human beings and creatures of Allah, but not for their religion.

In an apparent reference to heaven and hell, the PAS-linked preacher said that non-Muslims will end up in ‘another place’ when they die.

As such, Muslims cannot be yoked together with non-Muslims, said Syakir

Sashi said it is time the dirty abnegation and degradation of other religions comes to a halt.

“Any right-minded Malaysians will not stop until he is taken to justice in accordance with the law,” he added.

Meanwhile, in Sarawak, lawyer Leslie Ting agreed that it is not an excuse for Syakir to represent that he was misunderstood.

“He claims himself to be an Ustaz and as a public figure, he should have thought wisely and represented himself in a manner which would not be misunderstood,” said Ting, who is also Parti Bumi Kenyalang (PBK) Miri Deputy Director of Political Affairs.

Ting had accompanied two of his party members to lodge a police report against Syakir recently.

In giving his assessment from a legal standpoint, Ting said the preacher had clearly made disparaging racial comments about non-Muslim religions and the Dayak community.