According to Radzi Jidin, the malicious actions of the account owner are highly irresponsible and a police report had been lodged. 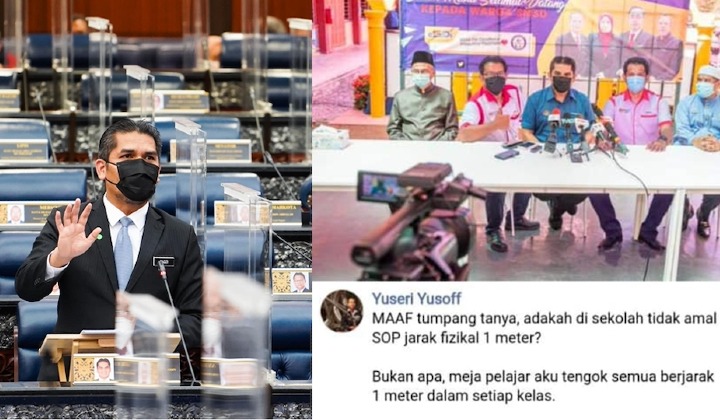 On October 3, Senior Minister of Education Datuk Dr Radzi Jidin was present in Kuala Terengganu to review the first day of the reopening of schools.

His entourage was said to have attended the opening of schools in Terengganu, including Sekolah Menengah Sains Dungun.

He also shared about the visit on his Facebook page.

Still, a Facebook post went viral along with several photos that purportedly showed the Education Minister not practising social distancing.

I was informed of a Facebook post that went viral along with a picture that purportedly showed him as not maintaining social distancing during a press conference. As far as I remember, apart from Dungun MP Wan Hassan Mohd. Ramli and Terengganu Education Exco, Ustaz Satiful Bahari Mamat, no one was by my side during the press conference at Sekolah Menengah Sains Dungun on October 3.

In fact, after a review was made, the picture was actually fake.

He also considered that the malicious actions of the account owner were very irresponsible and his team had lodged a police report on the allegation.

If you look closely, it seems like the photos showing him breaking SOPs have been doctored.

Netizens began to pay attention to the pictures

In the comments section, netizens also scrutinized the pictures when it was mentioned that the pictures are fake and had been edited.