A complete lack of restraint doesn’t make the preacher less racist and bigoted, but it does mean that sometimes he says what others are thinking. 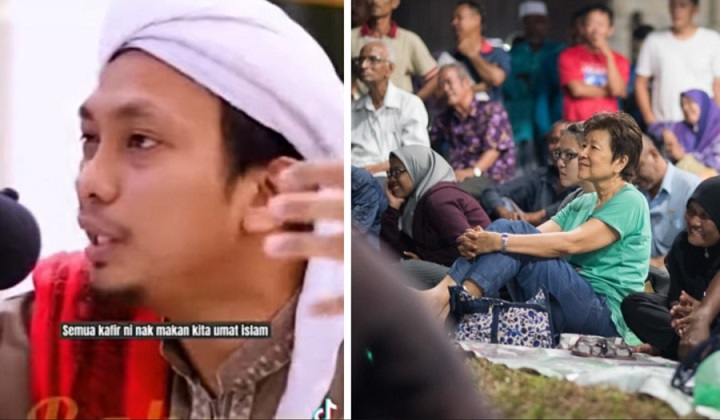 A hitherto unknown local preacher named Syakir Nasoha has horribly offended non-Muslims, and even many Muslims, in the country with his recent attack against other religions.

In a clip that has gone viral, he claimed that non-Muslims are clamoring to kill Muslims.

His remarks, delivered with delightful abandon, had been considered sacrilegious in Malaysia’s multi-racial and multi-faith setting.

Naturally, thousands of police reports had been lodged against him.

Yet not everyone disagrees with him.

His deliberate forays into plots against Islam and stirring racial tensions indeed remain awful and ugly, but there’s also another reason he speaks with no holds barred towards non-Muslims.

He said Syakir speaks a particular kind of truth about some issues the way only someone with more awareness of global problems can.

“Three-quarters of refugees in the world are Muslims…so how can it be that the Muslims are the oppressors?” said Jamal.

Such remarks are particularly stinging to non-Muslims because they do not care about the plight of the refugees, seeing it as a Muslim issue and not a human rights issue.

He claimed that with an open world now, extremist sentiments of Hindus, Buddhists and Zionist Christianity are also prevalent here in Malaysia.

“The authorities are more concerned about Muslim extremists than non-Muslim ones,” he told The Rakyat Post when contacted.

Nevertheless, he feels that Syakir should be more careful with words that come out of his mouth.

“I am sure the authorities will warn him to be more careful and respect the plurality of our society to maintain harmony.

(EDIT) “I’m not defending him but trying to analyse why he said so,” clarified Jamal later, adding that he had been promoting inter-faith relations for over 15 years.

The connotations of his words should not be linked randomly in the context of the nation.

Azmi said accusations against Islam and Muslims through Islamophobia campaigns targeting Islam as a terrorist religion are far more fueled by Western groups.

“The hatred against Islam spread worldwide to justify action against Islamic activists as reported by the Western media.

“The preacher should avoid making a surmise that all religions are at enmity with Islam,” said Azmi.

“We need to celebrate diversity and look at the bigger picture of developing the country harmoniously,” he said.

Citing an example, he said ABIM had been conducting muhibah programs among primary and secondary school students.

He called on Malaysians to find solutions to achieve unity despite the hurdles.

“We can’t deny there will always be those who distrust others, regardless of community.

“But what Syakir said certainly does not represent all Muslims – don’t forget about the silent majority,” said Muhammad Faisal.

“We don’t have this problem in the old days, and we’ve been together with all other races,” he said.

Murugiah urged the authorities to act swiftly against anyone who stirred racial tensions.

“In the spirit of Keluarga Malaysia as lauded by Prime Minister Datuk Seri Ismail Sabri Yaakob, the government should be fair to all Malaysians and protect everyone,” he said.