Fresh grads and students could fill up their time by volunteering. 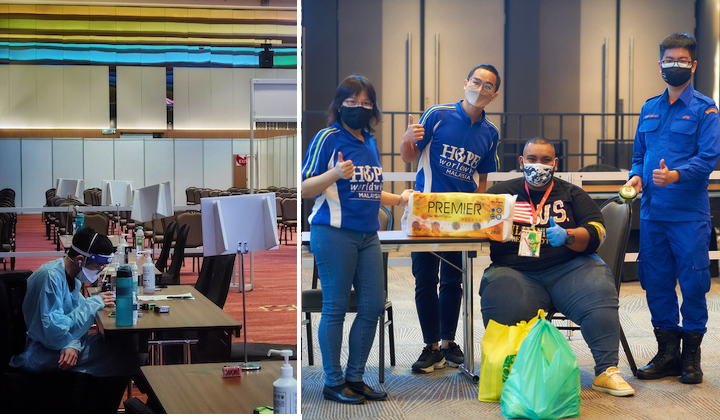 A novel experience as a volunteer at the Covid-19 vaccination centre (PPV) is the last thing that Jared Sandis James, 23, had expected.

He had just finished his diploma in logistics recently and was looking for a full-time job.

But in this current weak economy due to Covid-19, it’s challenging to find a matching job.

While stuck in an unemployment quandary, he decided to distract himself from the troubling picture by volunteering at the SPICE Convention Centre (SPICE CC) in Sungai Nibong.

“The allowance of RM50 per day certainly helps. Before that, I was jobless for more than three months,” he said with an awkward laugh. “But as volunteers, we would have done it even without the money.”

Most of the time, he helps people to fill up forms, especially those who are illiterate.

Using simple vocabulary and short sentences, James creates a climate of confidence and trust as people take their vaccine shots.

Nur Syazwani Khairul Azhar, 23, never thought she would be working as a volunteer at a PPV.

The Universiti Teknologi Mara (UiTM) student from Gelugor is currently in the midst of a semester break.

In August, she had just finished her final year papers when she learned that PPVs were looking for volunteers.

“I was fearful of contagion, and my parents were also hesitant. But I decided to give it a shot anyway.

“I invited my friends to join me, but they are also fearful,” said Nur Syazwani.

In overcoming her fear, volunteering has instead become a way for the business student to help reduce her parents’ burden.

Being the eldest of four siblings, she does not want to lean too much on her parents for financial support.

She works hard, at times volunteering for up to two weeks without rest.

Nur Syazwani is happy to volunteer with people from all walks of life, including mother of one Mah Su Mei, who was twice her age.

The 47-year-old church worker from Island Glade responded to the call for volunteers after reading about it on social media back in June.

“I was worried about infecting the family, but my husband was supportive,” said Mah, who just wants to give back to society.

It was quite hectic during the first two months, but now the crowds are getting lesser by the day, sometimes down to a trickle.

She praised the government for taking care of the volunteers.

Besides the monetary allowance, the volunteers are provided with three meals per day. “We eat well, including biryani rice and curry chicken,” said Mah.

The much lesser crowd at the PPV these days gives her hope that things will get better, but Mah remains cautious.

“As more people are vaccinated, we’ll get closer to normal,” she said. “But definitely not in the near future.”