The driver fell asleep on the wheel before the lorry skidded. 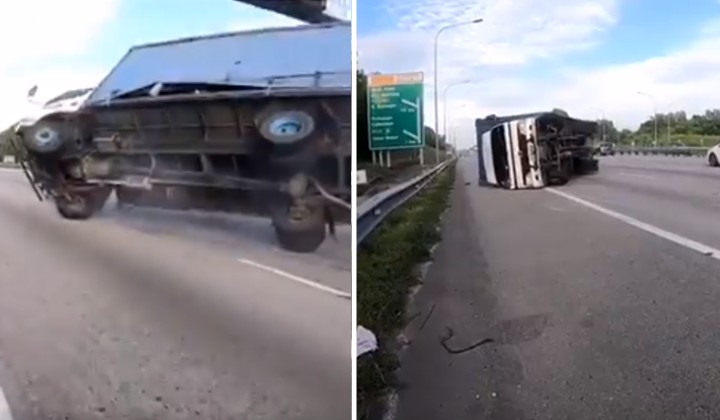 The driver who wrecked a lorry on the New Klang Valley Expressway (NKVE) recently was found to be under the influence of methamphetamines, according to the police.

A clip went viral on social media showing a lorry swerving violently on the expressway before it tumbled on the road.

Based on reports from Berita Harian, the incident happened at Kilometer (KM) 10.9 of the NKVE at around 8:30 am.

Preliminary investigation found that the lorry on its way to Subang was driven by a 33-year-old man who suddenly lost control because he was believed to have fallen asleep and failed to control the vehicle until it skidded.

He also said that a motorcycle heading to the same direction rammed into the lorry but the rider only suffered minor injuries.

Ramsay said the truck driver’s urine test was positive for methamphetamine and the suspect would be brought to court today for a remand application for an offense under Section 15 (a) of the Dangerous Drugs Act (ADB) 1952 by the Shah Alam Narcotics Division.

As for traffic offences, he added, the case is being investigated under Section 45 of the Road Transport Act (APJ) 1987 for driving a vehicle under the influence of drugs.

Witnesses or members of the public with information are asked to assist in the investigation by contacting the Investigating Officer of the Traffic Investigation and Enforcement Division (BSPT) of the Shah Alam District Police Headquarters, Inspector Muhammad Hasrul Suhiami at 011-31215697.

This is the second incident involving a drug induced lorry driver in this month alone, with the other one being the collision that happened at Jalan Ipoh, where the vehicle rammed into several cars including a Myvi which was crushed by the impact.