The Minister said that the area has been declared as a National Geo Park and logging activities are not allowed there. 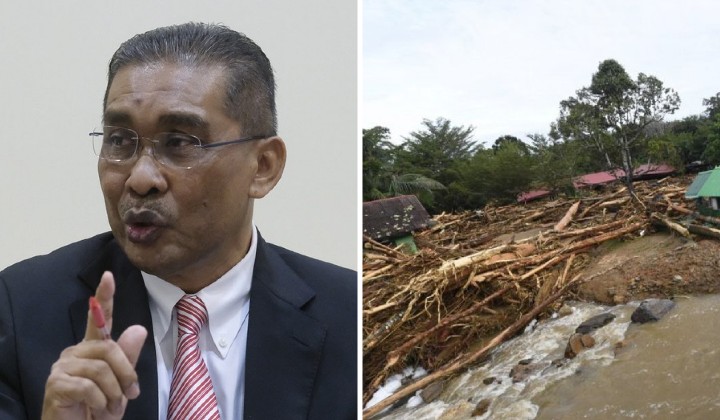 Energy and Natural Resources Minister Datuk Seri Takiyuddin Hassan labelled the latest flooding tragedy in Gunung Jerai, Yan, Kedah as an “Act of God” and not due to illegal logging.

According to reports from The Star, the Minister gave the answer today in Parliament as a response to to a supplementary question from Jerai MP, Sabri Azit during Question Time.

The MP asked what steps were being taken by the Ministry to make forests more sustainable along the roads leading to the peak of Gunung Jerai, which was ravaged by the recent flash floods on 18 August.

This is an act of god.

Opposition leader, Datuk Seri Anwar Ibrahim was clearly unimpressed with the reason given by the Minister, saying that he can’t mask greed by putting the blame on God.

Don’t blame God for this environmental problem. This is also the problem of the former minister of public works. If there is a collapse, (answer) the deeds of God. How do you know the deeds of god, when man is greedy and destroys logs.

Takiyuddin rebuts Anwar, saying that you can’t log there

Takiyuddin responded saying that the area has been declared as the National Geo Park of Jerai and because of this, logging activities are not carried out in the area.

He mentioned that the Geo Park is located in the Ulu Muda Forest Reserve with an area of 106,000 hectares of which 12%, of which 12,270 hectares are protected areas but more than 80% of that area can be cultivated.

The Minister mentioned that from 2014 to 2019, a total of 25,000 hectares in the Kedah Permanent Forest Reserve (HSK) was approved for logging, but no lumbering activity has ever taken place within that period of time.

He said the matter could be seen from the effects of the flood when the trunk was washed away along with its roots.

This shows that there is no logging in the Jerai area. This is called God’s will. God’s plan.

He also added that no violations of the Annual Felling Ration (CTT) of cultivable forests had been recorded nationwide over the past two years.