Dr Moheb Rahman Spinghar also called on the country to help pave the way for post-war-Afghan recovery through tourism. 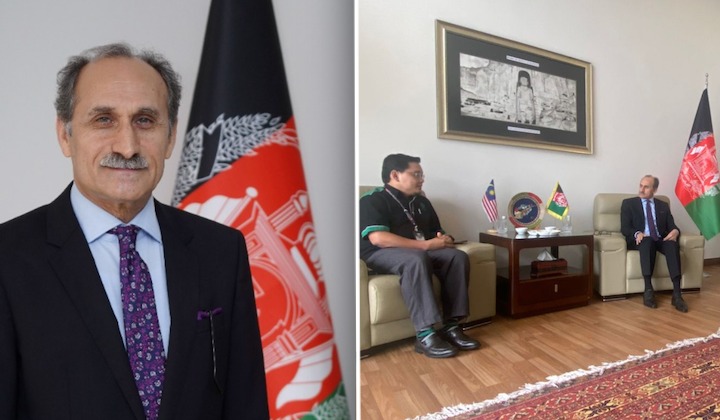 Amid speculations on his status as ambassador following the inauguration of a new Taliban-led government in Afghanistan, Afghan ambassador in Malaysia, Dr Moheb Rahman Spinghar, thanked Malaysia and its people for their “generous giving and steadfast support” regarding the situation in Afghanistan.

He said a humanitarian mission to Afghanistan led by Global Peace Mission (GPM) was not accidental.

GPM was established on September 26, 2001, to protest against the invasion of Afghanistan by the United States and its allies following the September 11 terror attack.

“It’s not a coincidence that GPM has started a fundraising campaign for the Afghan people…we know that Malaysians will be our partner because this is not the first time Malaysians have stepped up to help others,” he said in an interview with The Rakyat Post recently.

Afghans are also suffering from rising food prices, a severe drought and the spread of COVID-19.

“Every ringgit counts, with an impact that goes far beyond the donation amount.

“Each gift from a new donor represents a new Malaysian who cares and empathises with others,” said Samsuddin, who is also vice president of the Malaysian Islamic Youth Movement (ABIM).

GPM will be sending a team of volunteers to Afghanistan by the end of September.

The team will identify ways to ensure that the funds raised will go directly to the Afghans through local-based agencies and organisations.

At the same time, Dr Moheb said Malaysians could also help Afghans by visiting the country once international travel resumes to normal.

Despite Afghanistan being regarded as one of the most dangerous places globally, Dr Mohed believes that the Taliban-led government will bring much-needed stability.

“Tourism will help open up our landlocked country to the world.

“Afghanistan is, in fact, a fascinating Central Asia region that embraces both the old and the new.

“We expect to start receiving tourists by next year,” he said.

Dr Moheb also expressed thanks to Foreign Minister Datuk Saifuddin Abdullah, who recently announced a pledge of US$100,000 in financial contribution to help the Afghans.

According to the United Nations, US$604 million is needed to support 11 million Afghan people for the next four months.