They hope the Cameron Highlands edition will be as environmentally-friendly as Escape Penang. 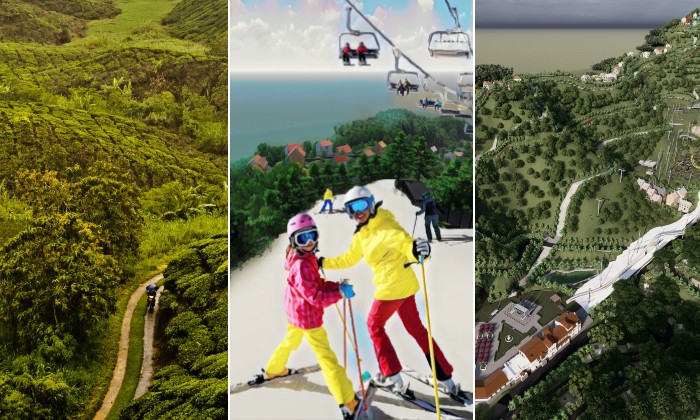 The theme park that is going to be built in Cameron Highlands will be a nature-based adventure park instead of a conventional one, according to ESCAPE explaining on how they plan to create ESCAPE Cameron Highlands.

The company behind the theme park – Sim Leisure Group – has reached out to TRP and explain more about the theme park and what they’re planning to do in the future.

They said that since it was announced, there has been concerns from the public in terms of the environment and its impact on the surrounding communities around the famous hill.

It is important for us to begin by saying that ESCAPE Cameron Highlands will not be the stereotypical theme park with roller coasters and mechanical rides sitting on acres of slabbed concrete but rather a nature-based adventure park.

Why this is important is to highlight is because our entire purpose for the destination is to not only preserve the environment but rather revitalize an abandoned and dilapidated tea plantation into a renewed green space for families that can celebrate play in unison with nature.

They also reassured that this is not simply lip service as their heritage of the ESCAPE brand ethos is built on the simplicity of outdoor adventure, preserving and restoring the environment while bringing people away from technology and back to the wonders of mother nature.

Sim Leisure also claims to have done their due diligence on the impact to the environment with an internal evaluation report, which they are willing to provide to the public to show their commitment.

The idea is for ESCAPE to reconnect people to nature through fun activities.

Not their first rodeo with misconception

They’ve mentioned ESCAPE Penang that was created almost 10 years ago also went through a similar situation – where it was to be another concrete jungle theme park that would destroy the environment.

The land provided for ESCAPE Penang was a discarded brownfield of concrete batching plant, machinery yard, abandoned site office buildings and workers’ quarters, of the Teluk Bahang Dam construction. We have since transformed it into a green playground, re-planting over 3,000 trees at our own expense.

The re-planted trees, originating from construction sites where they would have been cut down, are 50 years old on average and weigh between 15 and 42 tonnes.

Additionally, they also did a “tree adoption” programme which encourages land owners to contact ESCAPE Penang for transplanting unwanted trees from their lands to sites operated by ESCAPE.

ESCAPE Penang also vegetates its roofing with native grass and shrub species, serving multiple benefits: its substrate retains rain water, its drained water is cleaner from substrate filtration, cools roofing, its roofing materials have longer lifespans due to insulation against tropical heat and sunlight, sound reduction, and reduced costs to cool down buildings.

They’ve mentioned that their biomimicry approach with ESCAPE Penang, such as using rainwater to seep into the ground to support groundwater recharge, using layers of natural sand, pebbles, and small rocks at least 20cm deep instead of constructing its pathways and bare surfaces with cement or asphalt.

This slows rainwater runoff, enables microorganisms in the substrates to digest any water-borne pollutants, purifying the water on its path back into the aquifer. Thanks to the biomimicry interventions, 90% of raw water utilised by ESCAPE Penang’s play pools are harvested on-site. These are just some examples of how Sim Leisure has adopted a nature-based first approach.

Today, they said, ESCAPE Penang has a thriving oasis of nature that brings joy to many locals and tourists alike and they want to replicate the same philosophy to Cameron Highlands.

Ultimately, ESCAPE Cameron Highlands will be created to assimilate with nature and not combat against it. Attractions and game-play will be developed into the natural topography while increasing the areas green footprint rather than diminishing it. Our great hope is that ESCAPE Cameron Highlands becomes recognized for its environmental preservation and excellence best showcasing the destination in its authentic and natural setting.

Escape Cameron Highlands will be designed in order to become a seamless collaborator with the Cameron Highlands community with the goal of adding value to the destination and its existing culture while preserving the iconic traditions which has shaped Cameron into what it is today.

We will restore and rejuvenate the current abandoned site into a place where families can enjoy nature-based experiences. Enhance the green footprint within the area by major scale tree planting and preserving existing environmental conditions.

We also hope to become a part of the Cameron ecosystem, further elevating visitors to the destination, providing local businesses with additional opportunities. We aim to provide more jobs to local Highlanders that may potentially be suffering due to the pandemic. We will volunteer to support the existing community with issues such as traffic control with the erection of carparks at the entry to the highlands so visitors can use public transport rather than park along the roadside causing traffic congestion.

Ultimately, Sim Leisure hopes to add to the charm and allure that is Cameron Highlands further enhancing its national, regional and global placing in the hearts and minds of locals and tourists.

Prior to the undertaking of any greenfield project, Sim Leisure they said that the company will always undertake its own internal environmental due diligence and evaluation.

The current location was chosen due its current state – an old abandoned tea plantation that has major potential to become even greener, much like what we have achieved with ESCAPE Penang. Having said this, Sim Leisure is more than happy to provide an assessment report on its own volition to further demonstrate its commitment to the project.

Cameron’s Last Unspoilt River: A Visit Worth Your While