The young girl was originally spotted by a Welfare Department officer for being neglected and abused in KL. 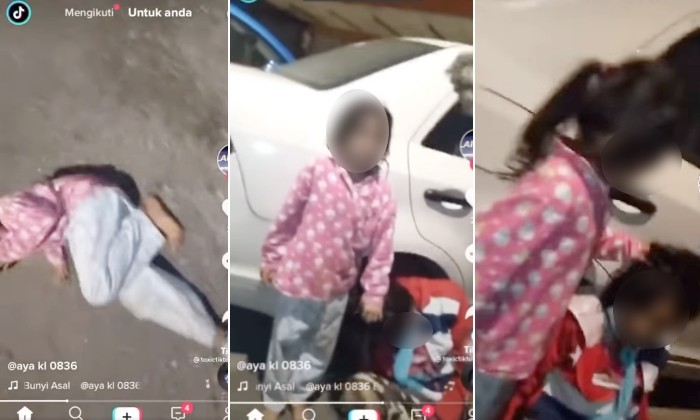 In a disheartening video shared online, the father of a 4-year-old girl who was recently found begging on the streets of Kuala Lumpur was caught in the act of hitting the child after he was confronted and beaten up by a disgruntled citizen.

Netizens were taken aback by viral footage of the father slapping the child after he himself was hit by a man who appeared to be angry at him for leaving the girl unattended on the city streets at night.

“If you leave this girl again, you’re dead!” yelled the man behind the camera, warning the father to take better care of his kid besides accusing him of being a drunk and a drug addict.

Despite being hit by her father, the little girl had stepped in to protect him when the samaritan continued to beat him up and threatened to call the police for what he had done to the child.

“Please don’t, he’s my dad,” said the girl crying with her father laying at her bare feet.

A series of videos posted on TikTok by user aya_kl6 shows one man’s interaction with a girl who he calls Aishah, and is believed to be the same girl in the viral video.

The man was understood to be a shopkeeper at a local convenience store where the girl frequents and refers to her as his regular customer.

Aishah and the man appeared to be close – with him seen brushing and fixing the girls hair and them conversing with one another.

“I want to be your mom, your dad and love you. I don’t have parents myself you know?” said the man in one of the videos as the girl tells him stories of her family.

The man at one point even tried to take the girl home with him, but she refused to leave her father’s side.

News of the girl’s abuse was recently braught to light when a Welfare Department officer found her abandoned in Chow Kit.

Bukit Aman Sexual, Women and Child Investigations Division (D11) Principal Assistant Director Siti Kamsiah Hassan previously said that the authorities have been made aware of the case and are actively searching for the girl and the father’s whereabouts.