He was found positive for meth and heroin. 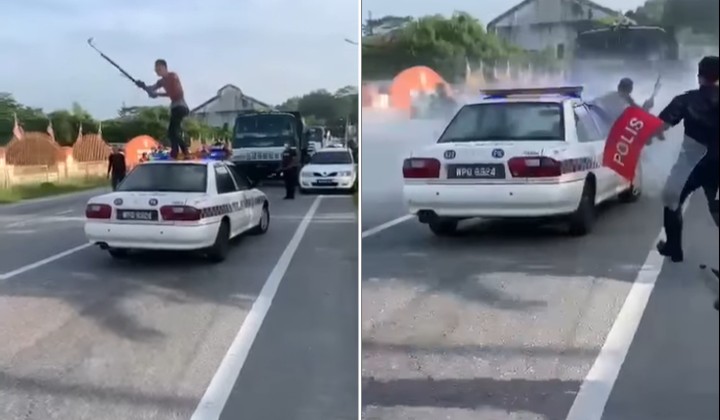 Police have arrested a man who went berserk with a scythe in front of a police station in Gopeng, Perak.

Videos of the man surfaced online showing him semi-naked on top of a police car while flailing the weapon.

The man managed to create a scene in front of the police station before the police, along with the help of the Fire and Rescue Department stepped in to stop the man.

He was under the influence of drugs

Utusan reported that the man was found to be positive for drugs – methamphetamine and heroin – based on urine tests conducted on the 61-year-old.

In the incident that happened at 8 am, the suspect entered the Gopeng Police Station area on a motorcycle while carrying a machete and sickle before swinging the weapon in front of the entrance of the station’s inquiry office where a police officer tried to calm him down.

The suspect then tried to run away to Jalan Ipoh-Kuala Lumpur but was blocked by the police at the station gate.

A patrol car was also parked in the middle of the road to prevent the public from passing through the area.

The Suspect then went towards the vehicle and climbed the roof while swinging the machete and sickle he was carrying to avoid being arrested. However, a team of members from the Gopeng Fire and Rescue Station arrived at the scene to help the police make the arrest. The suspect was arrested when he fell on the road due to water spray by firefighters.

He added that, based on preliminary information, the man involved had gone on a rampage in the Lawan Kuda Public Market area before heading to the Kopisan housing area and Gopeng Police Station.

The suspect was arrested along with a machete, sickle, a motorcycle and four keys. A remand application for the suspect will be carried out tomorrow.

The case is being investigated in accordance with Section 427 of the Penal Code, Section 90 of the Police Act 1967, Section 6 (1) of the Corrosive and Explosive Substances and Dangerous Weapons Act 1958 and Section 15 (1) (a) of the Dangerous Drugs Act 1952.