This 400 meter walkway is located in the middle of Kota Kinabalu, Sabah. 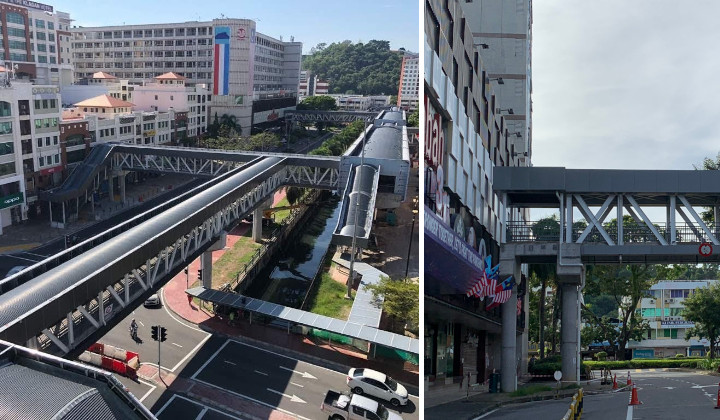 [UPDATE: KK Skybridge Leads To Dead End Because Centre Point Sabah Was “Not Part Of the Plan”]

The skybridge that connects Asia City, Center Point Shopping Mall, and Api-Api Centre in Kota Kinabalu is finally completed and will officially open to the public on 9 September.

However, it did not take long for Sabahans to notice that there was something comically wrong with the walkway: The path to Center Point Shopping Mall leads to a dead end.

The skybridge is built right up to the side of the mall, but there is no door into the mall nor a staircase leading down.

All that anyone can do if they accidentally took this branch of the 400m walkway to get to the mall is to turn around, get down from the skybridge, and cross the street through traffic — defeating the purpose of the walkway in the first place.

The completion of the project shows that the Gabungan Rakyat Sabah-led government is a proactive and caring government.

The bridge is said to have cost RM31.5 million to build. Its construction was delayed because the developer went bankrupt.

Earlier this year, Hajiji visited the site and allocated RM4.7 million from the state government to complete the project.

The original poster of the tweet did some digging and found a document dated 6 November 2019 which said RM60 million has been allocated to the project by the previous government and it only needs another RM4 million to complete.

[UPDATE: Here is the Parliament hansard dated 6 November 2019 he is referring to.

Where did the RM27.8 million go? Perhaps it is used to pay for the same technology seen on Platform 9 ¾.

At least the rest of the skybridge is still functional.