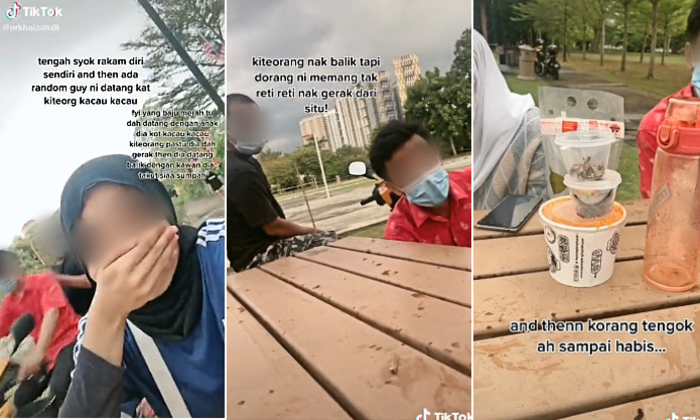 A painfully uncomfortable video of two female students allegedly being harassed by men while they were out having a picnic near their home in Wangsa Maju, Kuala Lumpur is making Malaysia’s skin crawl.

Postings shared by 20-year-old TikTok user elynnsicomeltu or Elynn, caught the two men making unsolicited advances towards herself and a friend at a public park in Sungai Bonus, despite being asked repeatedly to leave.

In the video, a guy in a red shirt is seen arriving on a motorcycle with his companion, wearing black, and they proceeded to sit at the same table with Elynn and her friend.

“Don’t be scared, we don’t eat people. We eat you,” said the man in red with a creepy laugh, as he went to grab a seat next to Elynn’s friend who was sitting across the table from her – a look of discomfort can clearly be seen on her face.

The guy in red then continues to berate the women for their address and phone number while his friend sits on the bike that’s parked next to the table.

“Why? I just want to be friends. Am I such a bad guy? I have good intentions, you know,” sneered the guy in red as Elynn and her friend asked to be left alone.

Elynn shared that her friend was shaken with fear during the encounter. She openly referred to the men as “psychos” in her video for having no respect for people.

The two men finally left the ladies alone when they themselves wanted to leave.

She explained that the men had even tried to follow them as they tried to make their way back home.

Elynn noted that the man in red had earlier come to bother them while he had a child with him. Apparently, the guy left only to come back later with his partner in crime.

Elynn later shared that she and her friend had filed a police report following the incident based on advice from social media users who were shocked and disgusted by her story.

With the video now viral, netizens not only conveyed their outrage at the men’s behaviour, but many also wrote in empathy for Elynn, her friend, and women in general, for what they are forced to go through in life.

the people who always go "kau yang layan", "did you say no" kau tengok ni sampai muntah. She said "jangan kacau" MULTIPLE TIMES. Men harass bc they WANT TO. bc THEY ENJOY IT. They dont care if we're uncomfortable. thats why a no doesnt work if u dont teach men to be respectful https://t.co/GbiurDl84s

Netizens also move to expose “victim blamers” who criticised Elynn and her friend for simply existing as women – making note of their attire and modesty.

Stepping Into The Future Of Smart Communities