He had claimed that his mother, sister, brother-in-law, nephew and niece, wife, and 8 children had died. 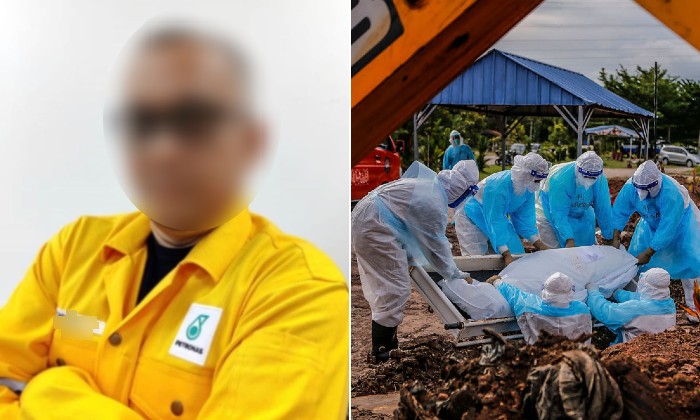 Cops arrested a 45-year-old contract worker employed with Petronas’ Pengerang Integrated Complex in Johor for allegedly scamming co-workers and the public with a fake story that 14 of his family members had died of Covid-19 to collect donations.

Police officials say that the suspect had been spreading the lie since June to take advantage of people’s sympathy and collect handouts straight to his bank account.

Reputedly, the man had collected some RM91,000 in donations before his ruse was uncovered.

He was arrested on 4 September and investigated under Section 420 of the Penal Code for cheating, dishonesty and deception, which carries a maximum punishment of 10 years imprisonment, fines as well as whipping.

Confirming the arrest, Petronas said that it does not condone employee misconduct and would be cooperating with investigations.

It’s understood that a sob story where a Petronas supervisor had lost his wife, eight children, and other family members to coronavirus had been floating around personal messaging apps and social media.

The note described the heavy burden faced by the man who lost his wife and three children between June and July. Then in September, the message was apparently updated to say that his five children, mother, sister, in-laws and nephews and nieces were also killed by the pandemic.

A series of screenshots spreading on social media also reveal how deep the con had gone down.

Supposedly, the man’s co-workers and bosses were even tricked to attend a virtual ‘tahlil’ or wake to pay respects and mourn the family’s death.

Even Johor’s Crown Prince Tunku Ismail Sultan Ibrahim almost fell victim to the scam – having ordered the Johor Health Department to help the man in any way that it could.