The statement by PH was made in response to a statement by Idrus Harun that is said to have contradicted the Agong. 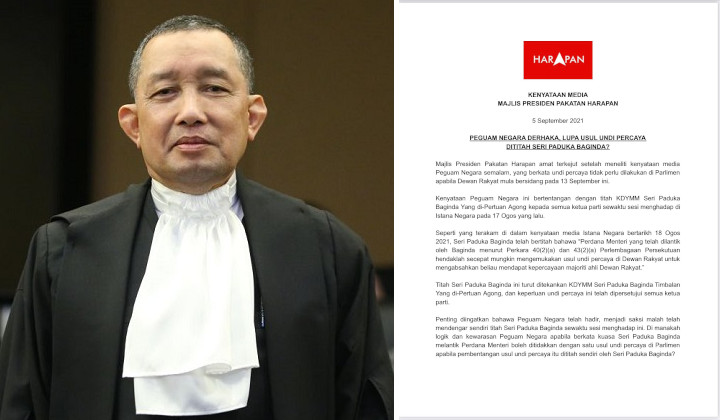 The Pakatan Harapan Presidential Council said that the statement made by the Attorney-General Idrus Harun yesterday (4 September) was in opposition to the command of the Yang di-Pertuan Agong.

On 17 August, leaders of all political parties were called to meet the Yang di-Pertuan Agong at Istana Negara.

The Agong told all in attendance that the Prime Minister that he has appointed,

according to Article 40(2)(a) and 43(2)(a) of the Federal Constitution, must table a vote of confidence in the Dewan Rakyat to legitimise his position.

However, the Idrus, in a statement said that there is no need for the Prime Minister to do so citing that doing so would mean the absolute power of the Agong could be overridden which is not in line with the Federal Constitution.

The Pakatan Harapan Presidential Council calls this statement a ‘derhaka’ to the Agong and demands that Idrus resign.

They also stated that a vote of confidence will be tabled in the Dewan Rakyat when it reconvenes on 13 September.

“No More Ceasefire”, Umno Will Not Continue MoU With PH