Hannah Yeoh lodged a police report over a fake poster passed around among MPs. 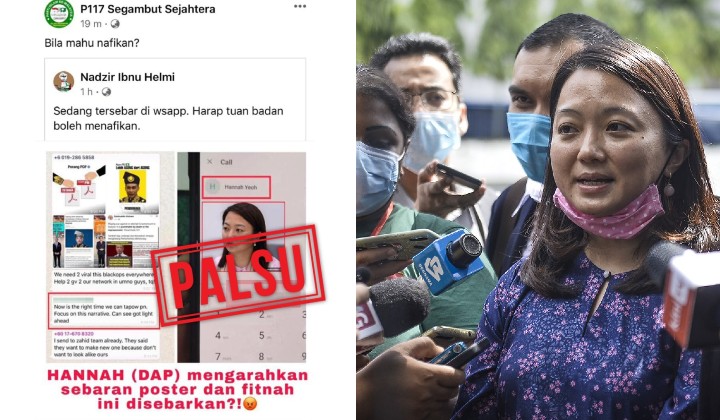 Today, 26 August, Segambut MP Hannah Yeoh gave her statement to the Sentul police regarding a police report she had made over a fake poster.

The poster, made against her, alleged that she encouraged attacks against former Prime Minister Tan Sri Mahiaddin Md Yasin’s government over disagreements with Istana Negara.

In a report by MalaysiaKini, Yeoh, in a virtual press conference outside the Sentul police headquarters claimed the poster was circulated by Perikatan Nasional (PN) MPs, MCA and PAS leaders in particular.

She expressed her hopes that the police will commence investigations as soon as possible.

“At that same time, I have instructed my lawyers, Khairil Khalid and Athari Bahardin, to issue a letter of demand to the PN politicians that we have found online – MCA and also, PAS – for sharing fake news,” she said.

Athari said the first course of action will be to request the implicated individuals to remove their postings on social media bearing the fake poster, and issue public apologies.

He added that failing to comply with the requests, would result in legal action against them.

The poster was shared on a PAS-aligned Facebook page with the caption “When will it be denied?” Following which, Yeoh made a post on her own Facebook page, denying the allegation.

“This morning I was informed of PAS people spreading a fake poster again in FB, slandering me. This is all false and my political secretary is on the way to make a police report,” she said in the caption.

The lawsuit however, was struck out by the High Court for technical reasons.

We are sending out letters of demand as I have been slandered many times and have not received justice. Even though I was slandered previously and the police had met the accused, the attorney-general did not take action in court so I did not feel that I had received justice.

This, according to Yeoh, is why she hopes the police will conduct an investigation so she can seek justice in court against those who have spread the fake news.