People use Sungai Baleh to travel between Kapit and Sibu. 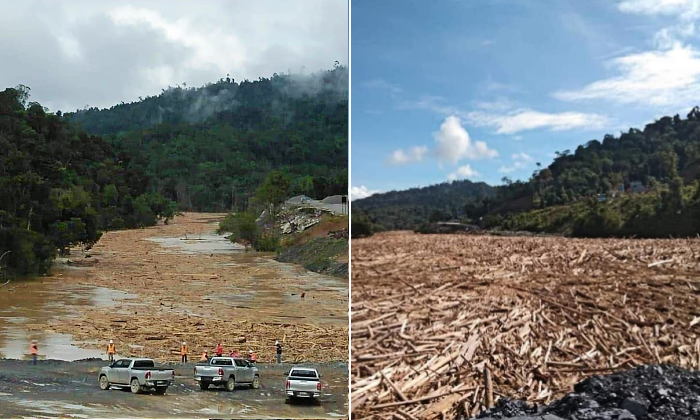 Dealing with traffic jams on the road is one thing, but having to face a ‘logjam’ on your commute must be a whole nother experience…

The Sungai Baleh river in Sarawak was blocked by a massive logjam when a huge pile of timber and debris came washing down from logging sites upstream during heavy rains.

The tsunami of wood reportedly occurred on Friday night (20 August), starting from Batang Baleh, heading downstream towards Sibu – passing Kapit between 8.30 and 11 pm.

Images of the logjam shared online saw the river being blocked up by floating debris – stretching as far as the eye can see, and piling up on riverbanks.

Though the sight of the incident can seem to be a bit dystopian to some, according to the Sarawak Rivers Board (SRB) the extent of the situation wasn’t really that bad and was still under control.

Not simply a nuisance

James explained that the incident shared similarities to the logjam which occurred in Sungai Baleh back in 2010, where a wall of timber stretching all the way from Kapit to Sibu had blocked up the river for days and cost the state around RM2.7 million in damages.

Writing on social media, the Minister stressed that such tragedies devastate both the environment as well as the safety and lives of the people who depend on the river.

James added that it was time to stop the timber concessionaires operating in Batang Baleh to end the depredation.

He also revealed how deep of a connection the local communities there had with the river and stressed that humans, not Gods, were to blame for this incident and the one in 2010.

The Iban residing along the Baleh river were petrified! So they did a special offering to pacify the Gods in Ulu Baleh, whom they thought were angry at the environmental impact caused by logging activities! I was involved and so were the YBs (representatives) of the Kapit division. We thought the gods were pacified by our peace offering, but not for long! The Iban Miring ceremony of 2010 didn’t pacify the right Gods, it seemed. The ‘gods’ who caused the logjam are human beings!

Sungai Baleh is one of many tributaries that flows to Sungai Rajang – the longest river in Malaysia.

The communities near Sungai Baleh depend on the river for its natural resources as well as a means of traversal.

Before the main road connecting Kapit and Sibu was opened in 2020, people would mainly rely on the river’s longboats and ‘penambang’ ferry rides to travel the 125km journey up or down the river – which takes about three hours per trip. The river is also used by larger vessels to transport cargo.

The logjam, however, makes navigating the river very dangerous and boat operators have been advised to take absolute care on the water.

According to the SRB, the volume of debris flooding the river was still manageable and they were monitoring things closely.

Sungai Baleh was also the site of the Baleh Hydroelectric Project (HEP), a dam coming fully online in 2026 and would be providing clean hydroelectric power to the region.

The dam’s operator Sarawak Energy Berhad (SEB) expressed concerns that such incidents pose a threat to the project and are keeping a close watch on things to keep the dam from being obstructed.

It is said that the logjam can only be cleared when the river finally recedes and things are deemed safe.