Malaysia’s 9th Prime Minister lays out his plans for the country. 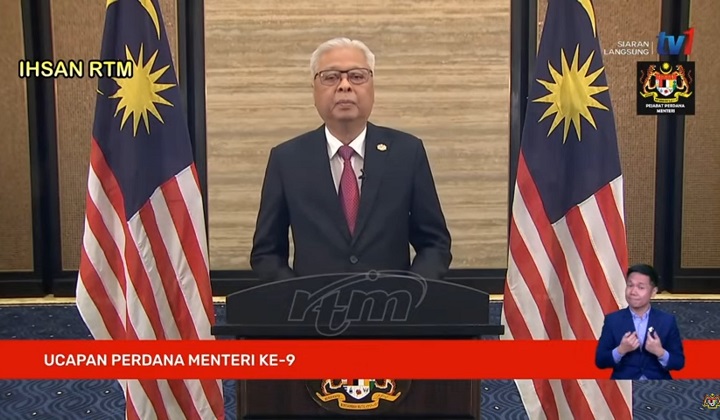 Prime Minister Datuk Seri Ismail Sabri Yaakob in his inaugural speech thanked the Agong for his appointment as the Prime Minister.

He then called for all members of the Dewan Rakyat to work together to help the nation recover, while putting aside differences with the concept of Keluarga Malaysia (Malaysian Family).

I adapt to the concept of Malaysian Family as this phrase is inclusive in nature. Which cuts across boundaries of religion, race and ethnic.

He announced that the strategy that has been formulated by the previous government will be continued and improved via collective views of the national Public Health experts.

As Malaysia’s vaccination rate is one of the highest in the world, the same program will be continued as well.

To achieve herd immunity sooner, the National Covid-19 Immunisation program will be enhanced.

Ismail Sabri pointed at Labuan which has achieved a 90% vaccination rate and single-digit in new Covid-19 cases in the last seven days as proof of the success of the existing plan to combat the pandemic.

He then announced that 6 million more Covid-19 vaccine doses has been ordered and will arrive in early September.

For The Economic Sector

To address economic stability in the country, the government will focus on achieving two objectives:

There will also be a short term focus on those who have lost their jobs, the middle income earners, medium and small businesses, and the economic sector including the tourism sector.

He added that his government is ready to work with the people, increase the involvement of young people, and listen to their opinions going forward.

Ismail Sabri pointed out that in a shot time, after the 14th general election, Malaysia has gone through two Prime Ministers and it is a wasteful political landscape especially considering that the next general election is only 21 months away.

He said that everyone must be ready to work together, across political lines, and with that offers the leaders of the opposition the opportunity to become members in the National Recovery Council and the Special Council to deal with Covid-19 .

In closing he promises that he will work with the people to restore Malaysia
back to her level of prosperity that we once accustomed to.