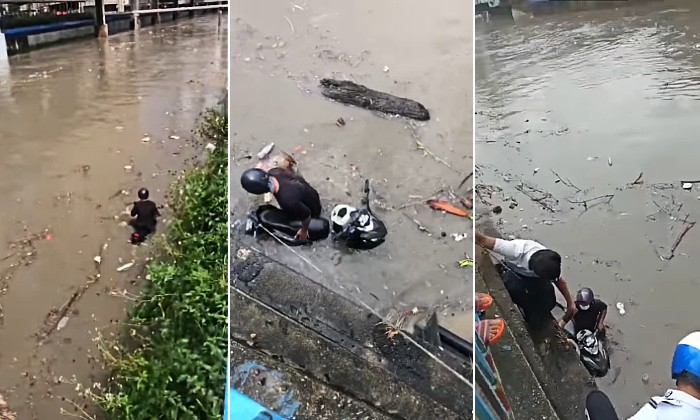 A family of three barely escaped a horrendous end when they were caught in the middle of roaring currents at the Klang River in Kuala Lumpur while out fishing there on Sunday afternoon (15 August).

Videos shared online showed police officers and members of the public rescued a couple and their daughter from a watery grave after they apparently got themselves stranded on the artificial river banks as water levels rise due to heavy rainfall.

Clips also showed a man, believed to be the husband and father, trying to navigate the overflowing river on his motorcycle as he desperately attempts to save his bike from being carried away by the river.

Though it’s unclear if he actually managed to save his vehicle, it’s reported that all three family members were safe on dry land thanks to the daring efforts of the Kuala Lumpur Traffic Police and the good people of KL.

Malaysia is expected to experience heavy rainfall from the month of August all the way till early January 2022 – during which some parts of the country are predicted to experience between 100mm to 500mm of rainfall, according to the Malaysian Meteorological Department (MetMalaysia).

Currently, the country is still in the Southwest Monsoon period which usually lasts between May and September and is normally characterized as the hottest, driest time of the year

However, MetMalaysia reports that some parts of the country, particularly in the West Coast of the Peninsular and Sabah, would be experiencing heavy rain, strong winds and thunderstorms due to a phenomenon called the ‘squall line’ in which storms are formed due to winds colliding with each other.

Malaysians can then expect things to get even wetter with the coming of the Monsoon Transition phase in October when heavy rains and storms are expected to hit the West Coast and inland parts of the Peninsular as well as western parts of Sabah and inland Sarawak.

Then from November onwards, Malaysia will be hit with the Northeast Monsoon, a.k.a. the winter monsoon, when heavy rains are expected to drench the Peninsular, especially the eastern states of Kelantan and Terengganu as well as East Malaysia.