The longest serving was Dr Mahathir at 22 years and 107 days (the first time) and the shortest was Mahiaddin (533 days). 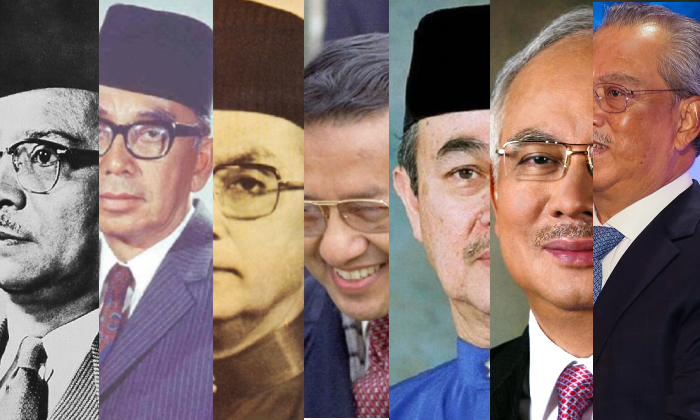 At the start of December 2019, the government tabled a parliamentary Bill looking to set a two-term limit for the nation’s future prime ministers.

Two-term premierships aim to prevent potential abuses of power. It protects democracy from becoming a de facto dictatorship by curbing the potential of monopoly, where a leader effectively becomes “president for life”.

A two-term premiership also helps to root out corruption and limits the powers of the prime minister.

In light of this bill, we thought of looking back at our previous prime ministers and the number of terms they were in office.

Tunku Abdul Rahman first served as the first Chief Minister of the Federation of Malaya from 1955 to 1957.

Due to this, he is regarded as Malaysia’s Father of Independence and Father of Malaysia.

Tunku Abdul Rahman was forced to resign in 1970, in favour of his deputy Abdul Razak after the 13th May riots in 1969.

Tun Abdul Razak is known for setting up Barisan Nasional to replace the ruling Alliance Party and launching the Malaysian New Economic Policy in 1971.

Abdul Razak died of leukaemia while still in office on 14 January 1976 at the age of 53.

At the time, he was seeking medical treatment in London and was posthumously given the title of the Father of Development.

Hussein Onn was appointed as prime minister after the death of Tun Razak.

He was renowned for stressing the issue of unity through policies aimed at rectifying economic imbalances between the communities in Malaysia.

In early 1981, he underwent a coronary bypass and by July decided to retire from active politics and relinquished his premiership due to health concerns.

Dr Mahathir was sworn in as prime minister after the resignation of Hussein Onn.

During his first tenure as Prime Minister, Malaysia experienced a period of rapid modernisation and economic growth leading to him being referred to as the Father of Modernisation.

Mahathir shockingly announced he would be stepping down as Prime Minister in June 2002 and finally left office in Oct 2003, choosing his deputy at the time, Abdullah Ahmad Badawi, as his successor.

Known affectionately as Pak Lah, Abdullah Ahmad Badawi is also referred to as the Father of Human Capital Development for his contributions and commitment in developing human capital.

After winning his second election with a reduced majority, Abdullah faced heavy pressure to step down by those within his party, including his predecessor Mahathir.

By July 2008, Abdullah announced that he would step down as Prime Minister in June and handed in his resignation letter to the Yang di-Pertuan Agong in April 2009.

Najib was sworn in as Prime Minister one day after Abdullah Ahmad Badawi handed in his resignation letter to the Yang di-Pertuan Agong.

He is referred to as the Father of Transformation due to his focus on domestic economic issues, political reform and transformation policies during his time in office.

Najib lost his position as Prime Minister after losing during the general elections.

His loss was highly attributed to his ties with the 1MDB scandal and the implementation of GST during his term.

Mahathir became the country’s Prime Minister again after 15 years of retirement after he joined the opposition coalition, Pakatan Harapan, and ran as its prime ministerial candidate.

Elections won: 0
Terms served: Less than 1 term
Total time as Prime Minister: 17 and a half months and serving as the Caretaker PM beginning 16 August 2021.

Tan Sri Mahiaddin Md. Yasin was made Malaysia’s 8th Prime Minister following the fall of the Pakatan Harapan government in 2020 and held the position for a total of 17 months and a half between 1 March 2020 to 16 August 2021.

Mahiaddin and his entire Cabinet resigned following months of political turmoil as well as the Covid-19 crisis.

The former premier was elected as Malaysia’s Caretaker Prime Minister by the Agong before a new PM can be installed.

In the history of Malaysia, only Mahathir and Tunku Abdul Rahman served more than two terms. Mahathir served the most, about six terms in total.

If the Bill is passed, Malaysia will join Indonesia, the Philippines and Vietnam as the only Southeast Asian countries to practice presidential term limits, similar to Russia and the United States.