The Prime Minister says he was informed by the Agong that 8 UMNO MPs had pulled support for him. 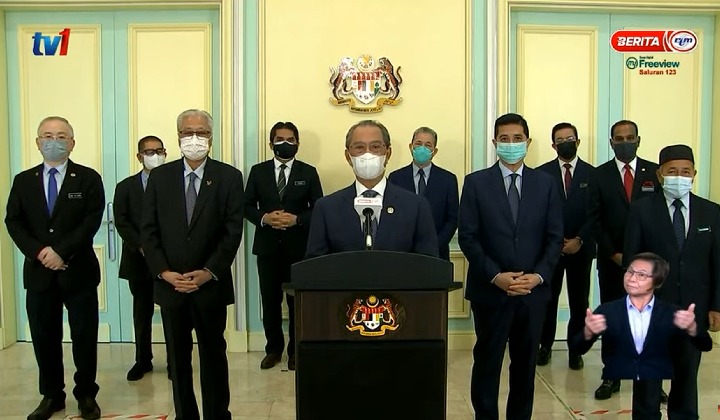 There will be a vote of confidence that will be held in Parliament when it reopens in September to determine whether Prime Minister Tan Sri Mahiaddin Md Yasin still has the majority in the Dewan Rakyat.

He gave the announcement after meeting the Yang-di Pertuan Agong this morning and also apologised for having to come out and explain to the public on whether he is still the Prime Minister.

The Prime Minister was present with several Ministers during the broadcast, including:

He mentioned that the Agong was told that 8 UMNO MPs have withdrawn their support but said he had received letters from other MPs which led him to believe he still has enough support to continue.

In the announcement, he also said there are some parties who were not happy with him being firm on certain matters such as not intervening in court matters and freeing certain individuals from their criminal charges.

Although this is going on, Muhyiddin mentioned that the government will still continue to focus on the rakyat and fight Covid-19 – including the vaccination drive and disbursing aid that was announced previously.

Expect More Defectors To Rejoin UMNO Before The Next GE, Analysts Say