It was peaceful, the attendees were mainly youngsters, and 20 police reports have been lodged. 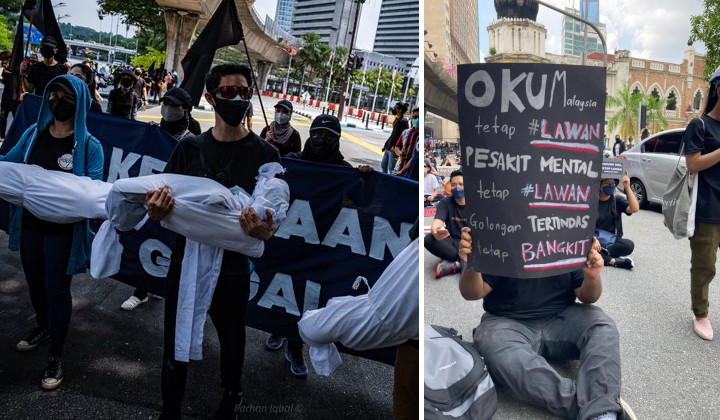 The “Keluar and #Lawan” protest on Sunday (31 July) was the culmination of netizens’ frustrations and dissatisfaction with the Malaysian government.

Hundreds of youths gathered on that warm weekend morning, all clad in black, a colour they chose to represent the protest.

According to a police statement by Kuala Lumpur Police Chief Commissioner Datuk Azmi Abu Kassim, an estimated 450 people gathered at Dataran Masjid Jamek, Kuala Lumpur at around 10:30 am.

The protest was peaceful. Of course, there were some who tried to hijack the message of the gathering by being rude and wild for attention.

However those who were actually there for the cause were carrying very creative signs.

This is a compilation of my favourite placards from today’s protest in KL that I drew based on photos shared on socmed. I can’t list all of you here but credit goes to all of you courageous, spirited & creative youths who were part of the protest.Thank you. #LawanTetapLawan pic.twitter.com/Uy4s3zxXGa

The gathering, said the police, happened for about 2 hours.

No immediate action was taken apart from barring the protestor’s entry into Dataran Merdeka.

However, the police noted that they will investigate and issue compounds to those who were responsible, citing that the protest is a health risk during the pandemic.

Until 1 August, more than 20 police reports had been lodged against the “Keluar and #Lawan” protest.

As of 12.30pm the same day, 29 individuals have been identified and will be called to complete the investigation.

Inspector-General of Police (IGP) Datuk Seri Acryl Sani Abdullah Sani in a statement added that the police is still in the process of identifying a few more individuals based on video and photos at the protest.

A day before the protest, the police has already arrested a #Lawan activist under the Sedition act.

READ MORE: This #Lawan Activist Got Arrested For A Tweet & Tomorrow They’re Taking To The Streets

Prior to that, the police investigated the drive-thru #Lawan protest that happened on 24 July.