The 2 August meeting is deferred to an unspecified later date. 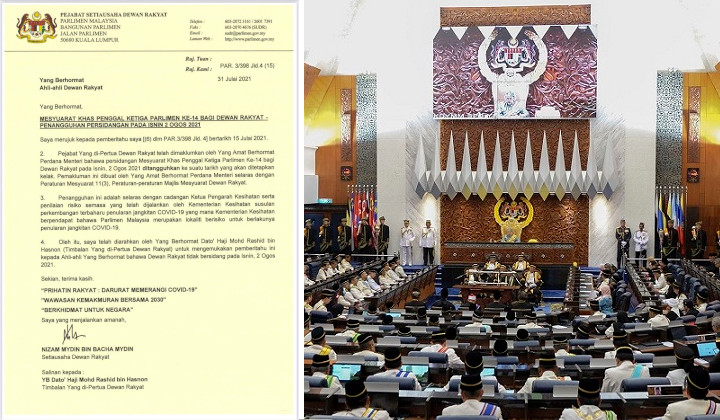 [UPDATE: A letter from the Dewan Rakyat Secretary today added a few more details to the statement and cited item 10(3) of the Parliamentary Standing Order instead.

The Secretary of the Dewan Rakyat announced yesterday (31 July) that the Special Parliamentary Sitting for the third session of the 14th Parliament will be postponed to a later date per the Parliamentary Standing Orders 11 (3).

In his letter, Dr Nizam Mydin Bacha Mydin stated that the postponement is in line with the recommendation by the Health Director-General Tan Sri Dr Noor Hisham Abdullah.

The decision was made after new Covid-19 infections were detected at the Parliament on 29 July. The discovery caused the Parliament to be postponed multiple times during the afternoon session.

At the same time, Malaysians have been at the edge of their seats since the morning of that Thursday.

It was revealed in Parliament by the leader of the opposition that the Agong did not consent to the emergency ordinance being revoked.

READ MORE: Agong Says Has Not Consented To Emergency Ordinance Being Revoked

Of course, many looked at the multiple postponements of the Parliamentary sitting since that day as more than just a coincidence.

Harapan, the political coalition consisting of Keadinal, Amanah, and DAP, released a response to the letter by the Secretary of the Dewan Rakyat.

It says that thorough testing has been done on Thursday of all who attended the Parliament. According to the Health DG, the positive rate was 0.9%, far lower than the 5% threshold set by the World Health Organisation (WHO).

Therefore, the statement continued, the last day of the Special Parliamentary Sitting (2 August), should not be postponed.