The #Lawan street rally protest is scheduled for Saturday morning at Dataran Merdeka. 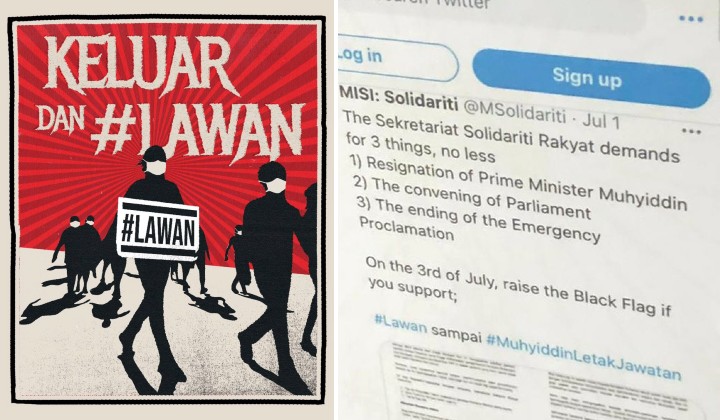 20-year-old Sarah Irdina, co-founder of youth-led activist group MISI: Solidariti, was arrested yesterday by police. She was charged under the Sedition Act 1948 for a Tweet outlining 3 demands, namely:-

See how takut and easily shaken this #KerajaanDerhaka is. This has gone much too far. #LawanIntimidasi https://t.co/txcDfYJQx2

While she was later released, #FreeSarah trended strongly all day yesterday as the group demanded her release and geared up for a pre-planned protest in KL City Centre this weekend.

The #Lawan protest is an expression of public anger protesting the “failures and mishandlings of the pandemic by the government”.

Earlier this month, there was already a #Lawan convoy that garnered attention for the main #Lawan street rally protest happening on Saturday morning, 11am, at Dataran Merdeka.

Ahead of the scheduled protest, police are reminding citizens that SOPs still apply under the National Recovery Plan (NRP). Cross-district travel and social gatherings are not allowed during this time.

However, MISI: Solidarity has prepared information for activists to protest while still staying safe.

1/ ONE MORE DAY UNTIL WE KELUAR DAN #LAWAN 🏴

🚨 To ensure the protestors are safe this weekend – make sure you’re prepared and follow these guidelines for the event.

You can read the full thread HERE.