“The Federal Constitution clearly states that the power to enact and repeal Emergency Ordinances rests with the Agong.” 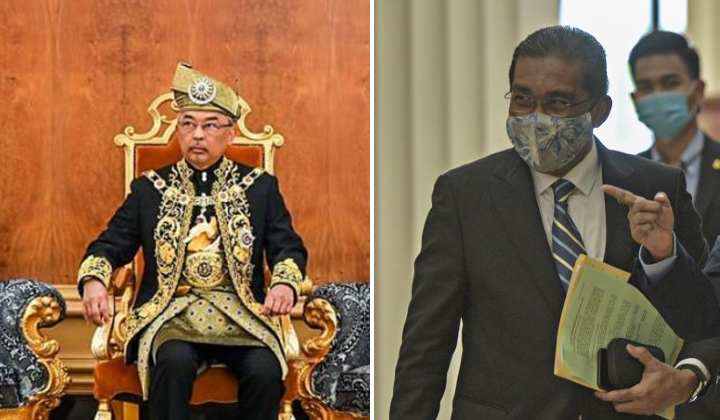 The Yang di-Pertuan Agong, Al-Sultan Abdullah Ri’ayatuddin Al-Mustafa Billah Shah has voiced his deep regret that the Emergency Ordinances were retracted on 21 July, 2021 without his consent as such powers rest with him.

In a statement, Comptroller of the Royal Household Datuk Indera Ahmad Fadil Shamsuddin says that Article 150(2B), read together with Article 150(3), of the Federal Constitution clearly states that the power to enact and repeal an Emergency Ordinance rests with the Agong.

The Agong also expressed his deep regret that Parliament and Law Minister Datuk Seri Takiyuddin Hassan and Attorney-General Tan Sri Idrus Harun did not table and debate the revocation of the Emergency Ordinances in Parliament.

His Majesty said he had instructed them to do so when he spoke to them online on 24 July, 2021.

As such, the Agong says the statements made by Takiyuddin in Parliament on Monday were inaccurate and had misled Parliament.

Furthermore, the Agong said the rushed act, and contradictory and misleading statements in Parliament not only failed to respect the principle rule of law but also ignored His Majesty’s functions and powers as the Head of State.

His Majesty is aware of the need for His Majesty to act in accordance with the advice of the Cabinet as contained in Article 40 (1) of the Federal Constitution. However, His Majesty expressed the view that His Majesty, as the Head of State, has the duty to provide advice and reprimand in the event of any unconstitutional action by any party, especially those who perform the functions and powers of His Majesty the Yang di-Pertuan Agong.

Moments after the statement was released by the palace, pandemonium broke out in Parliament with Opposition MPs shouting that the government had committed treason.

After a brief discussion, the Speaker suspended proceedings till after lunch.