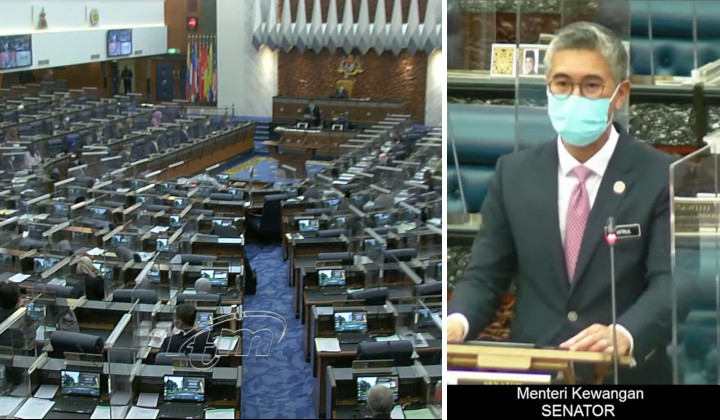 Tengku Zaful will present and later answer questions regarding the the economic assistance packages that the government has offered throughout the pandemic.

This Special Parliamentary Sitting has been scheduled for five days (26 to 29 July, and 2 August). There will be a three day break in between.

The last time Malaysia’s Parliament met was on 17 December 2020. A month later, in January of 2021, a State of Emergency was declared.

10:00 am – The bell rings. The parliamentarians to enter the Dewan Rakyat. Today’s session is about to begin.

10:04 am – Opposition leader Port Dickson (Datuk Seri Anwar Ibrahim – PKR) points out parliament sessions are too short for parliamentarians to ask questions and air their concerns.

10:06 am – Datuk Azhar Azizan @ Harun (Yang di-Pertua Dewan Rakyat) explains that his ability to extend the parliament time is limited to 15 minutes.

However, it is up to the minister who has the floor to extend the time further.

10:09 am – Pasir Gudang (Hassan Abdul Karim – PKR) said both sides (opposition and government) agree that the emergency ordinance is revoked and annulled. However, this should have been done in due process.

He suggests that this issue is addressed first.

The Speaker said that the ordinance and proclamation of the state of emergency, must be laid in the house, unless it has been revoked.

The question is, does it need to be debated. The rules, he said, are very deliberate. The constitution used the word ‘laid’, that means there is no debate.

10:25 am – Puchong (Gobind Singh Deo – DAP) however, pointed out that the Speaker has the power to allow a debate (such as the question and answer session during the special session) and therefore a vote.

10:45 am – The speaker ends the discussion by pointing out that his ‘residual power’ cannot be used against the standing order (such as the special parliament sitting) .

10:53 am – Parliamentary Minister (Datuk Seri Takiyuddin Hassan – PAS) who is also Kota Bhary MP, points out that in a meeting previously held, which was attended by parliamentarians from both sides and Health-Director General Tan Sri Dr Noor Hisham Abdullah, they had agreed to limit the parliamentary sitting session because of the pandemic.

11:00 am – Finance Minister Datuk Seri Tengku Zafrul Abdul Aziz takes the floor and details, to the lower house, the assistance economic packages the the government has offered during the pandemic so far.

He also details the government’s spending, so far, to accelerate vaccination, protect the people, and aid the economy.

11:28 am – Last year, Malaysia’s Gross Domestic Product (GDP) has fallen like many other countries. However, this year, because of a more targeted MCO 3.0, a growth of 6-7.5% is expected. The official announcement will be made in August.

The announcement, said Tengku Zafrul, is when the effects of the actions taken in the first quarter of the year can be seen.

Let us uphold the spirit of collaboration for the good of the nation.

The permission letters by MITI (Ministry of International Trade and Industry), which Bagan said, is often misused, must be eliminated and a better solution must be made.

Contributions of SME and small non-SME businesses to the GDP has dropped. They make up 98.5% of Malaysian businesses and provide millions of jobs which are all under threat.

Why bother giving tax cuts to these businesses when they can’t make money, asks Bagan. He then recommends that the economic sectors are reopened as a step towards normality.

Tourism lost RM100 billion last year and it is expected to happen again this year, but there are no assistance for them.

There are no savings for card credit holders as there are no moratoriums for them.

Pasir Gudang (Hassan Bin Abdul Karim – PKR) added to Bagan’s statement and asks how with the government restore the EPF funds that the people has withdrawn to survive.

Bagan continues by asking the Finance Ministry, why doesn’t Malaysia spend more to buy the vaccines that we need and said that lives are worth more than the money and the opposition will agree to the spending.

Decentralisation of powers is critical as efforts to return to normal.

Rasah (Cha Kee Chin – DAP) added that the RM300,000 one-off food basket fund to MPs, to help their constituencies, is not enough.

He suggests that the government should continue to send funds to each MP to help the people until the country enters Phase 4 under the National Recovery Programme.

Bagan continues by saying that spending by the Prime Minister can be done without it being tabled in the parliament during the state of emergency.

He asks what are the implications when the state of emergency ends.

We have no other choice but to ask the Prime Minister to resign.

12:23 pm – Parliamentarians requests for the session to be suspended for a moment.

12:30 pm – Speaker rules that proceedings should continue as the press statement is being evaluated by the speaker’s office.

12:45 pm – The bell rings. The speaker returns to the Dewan Rakyat.

A decision has been made to suspend the parliament until 1pm. Parliament will resume after recess (2:30pm)

Parliament is suspended until after recess.

2:30 pm – The bell rings. Parliamentarians are being called back to the sitting.

3:30 pm – The bell rings. Parliamentarians are once again being called back to the sitting.

MPs joke about the parliament being suspended again as they wait for the speaker.

Speaker announced he has received a letter from the Health Director-General regarding two positive Covid-19 cases at parliament.

Therefore follow-up tests must be done to all in attendance… No one can leave until the results are confirmed. Priority will be given to MPs.

Parliament is suspended again until 5:15pm.

There are rumours that the Datuk Azhar Bin Azizan @ Harun wants to resign his position as the Speaker of Dewan Rakyat.

There are rumours that Parliament and Law Minister Datuk Seri Takiyuddin Hassan offered to resign following the statement by the Yang di-Pertuan Agong.

READ MORE: Agong Says Has Not Consented To Emergency Ordinance Being Revoked

Regardless of what happens to the government of the day, we cannot let the COVID19 vaccination program be derailed #PICK @Khairykj

5:00 pm – Port Dickson releases a statement calling for a vote of no confidence against the Prime Minister.

5:15 pm – The bell rings .As Parliament resumes, the Deputy Speaker says that two more people have tested positive for Covid-19 and suspends Parliament till Monday.

Therefore the Health Ministry suggests that those who have attended Parliament on Monday, Tuesday, or Wednesday, but are not in attendance today (29 July) to get tested as soon as possible.

The Deputy Speaker also announced that the Parliament is suspended until 5:30pm and therefore will only reconvene at 10am, Monday 2, August.

5:29 pm – Former Prime Minister, Tun Dr Mahathir Mohamad releases a statement saying although the Prime Minister did not make the statement regarding the revocation of the Emergency Ordinance, he was still complicit.

7:01 pm – In response to the statement by the Yang di-Pertuan Agong, the Prime Minister’s Office issued a reply.