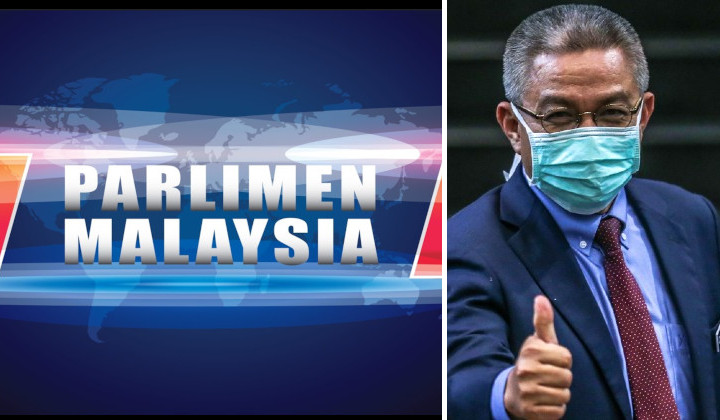 The second day of the Dewan Rakyat special meeting for the third session of the 14th Parliament will see Health Minister Datuk Seri Adham Baba taking the floor.

He will present to the lower house the efforts that the governments has taken to address the Covid-19 pandemic from the perspective of the Health Ministry.

This meeting has been scheduled for five days: 26 to 29 July, and 2 August. There will be a three day break in between.

The last time Malaysia’s Parliament met was on 17 December 2020. A month later, in January of 2021, a State of Emergency was declared.

10:00 am – The bell rings. Yang di-Pertua Deputy Speaker Datuk Seri Azalina Othman reminds that all MPs should wear their mask at all times. However, it is up to their discretion if they wish to take it off while speaking.

10:05 am – Gobind Singh Deo (Puchong – DAP) brings up the issue of the Emergency Ordinance.

Is it legitimate, why was it not made known to the other parliamentarians, and has it been presented to the Yang di-Pertuan Agong?

Ahmad Fahmi Mohamed Fadzil (Lembah Pantai – PKR) added that waiting for Monday may be too late.

10:21 am – Parliamentary Minister Datuk Seri Takiyuddin Hassan (Kota Bharu – PAS) said that to be fair to the government, he will explain everything regarding the Emergency Ordinance issue on Monday as advised by the Speaker on 26 July.

He noted that the number of RTK Antigen testing has increased by over 1000% since last year and continued to list all that the Health Ministry and the government has done in combating Covid-19.

Modular ICU has also been added to hospitals that are at capacity and more will be added to those that need it.

To increase the capacity for treating Covid-19 patience, private hospitals, training hospitals, and other health facilities have been repurposed.

As of 26 July there are 27.7 million MySejahtera users with 2.44 million premises using the MySejahtera QR code.

The MOH, with the assistance of NGOs, has taken actions to ensure the mental health of the frontliners and the public. This comes in the form of briefings, program, and counseling sessions for frontliners; and call centers for the public.

11:17 am – Sivarasa Rasiah (Sungai Buloh – PKR) requests for hard copy and digital copy of the briefing.

As such, Parliamentary Minister Datuk Seri Takiyuddin Hassan (Kota Bharu – PAS) will have to answer all questions on Monday (2 August).

11:48 am – Opposition leader Datuk Seri Anwar Ibrahim (Port Dickson – PKR) says he is sure, based on the actions of Kota Bharu, that the Yang di-Pertuan Agong has not approved the revoking of the Emergency Ordinance as stated by Kota Bharu yesterday (26 July).

Let it be known that the government has announced something that violated the constitution and disrespected the royal institution.

Almost immediately, other opposition MPs ask him for time to make a statement regarding contract medical staff.

For all it’s worth, l implore PN Govt NOT to punish or take any disciplinary action on All Doctors involved in #HartalDoktorKontrak.

The lack of unified action and coordination from top brass to bottom is the reason why the country can’t fight the third wave of Covid-19.

Kuala Selangor noted that what is needed to be done to address the pandemic, has been formulated a year ago when PH formed a think tank. He added that only now that he sees their suggestions are being practiced.

He reminded the lower house that sporadic cases just means that it has not been linked to clusters yet. The issue he pointed out, is the lack of effective contract tracing.

All the shortcomings in the health system, he stated, has to be exposed so that solutions can be found. This will not only benefit at times like pandemic but also for non-communicable diseases as well.

Kuala Selangor also said that poor diagnostics policy is an issue that the Ministry has to address. When speed is key, he added, if the RTK-Antigen test is positive, accept it without waiting for the results of a PCR Test.

Numbers are also not the answer. Kuala Selangor pointed out that the population density in Selangor is higher than most states. Therefore, the numbers in the states are of course, high.

The solution, he reiterated, is tracing, testing, support, and data sharing.

2:40 pm – Former Prime Minister Tun Dr Mahathir Mohammad (Langkawi – Pejuang) gives his opinion that the reason the government could not contain the pandemic is because of political decisions.

Political decisions cannot stop the pandemic. For example the National Recovery Council (MPN). It is a political solution.

What is needed, Langkawi said, is a council of professionals, free from politics.

He added that SOPs are a good measure, however is not effective if not enforced. Also, testing is proven effective, but the rate is too slow.

Langkawi then gave his opinion that there is too much bureaucracy when it comes to vaccination. There are too many steps to this critical solution that is causing it to become more difficult than it should be.

2:54 pm – Che Alias Hamid (Kemaman – PAS) says that the reliance on one point of data alone is not enough to fully comprehend the Covid-19 situation.

He also pointed out that the effects of the vaccination drive would only show in time.

3:01 pm – Datuk Seri Dr Wan Azizah Wan Ismail (Pandan – PH) shares her opinion that there is a lack of a holistic approach to the solution to the pandemic that the government has laid out.

She pointed out that there has been no update to laws regarding sexual harassment and the decriminalization of suicide, both serious issues caused by the battle against Covid-19.

Pandan was the former Minister of Women, Family, and Community Development.

3:15 pm – Datuk Seri Wilfred Madius Tangau (Tuaran – UPKO) shares his opinion that the current government is too focused in Putrajaya, especially when it comes to health, to a level where they ignore experts in states who know their states better.

He also asks what the Health Minister is going to do about the increasing number of suicides.

3:20 pm – Datuk Mohamad Alamin (Kimanis – BN/Umno) requests not to transfer healthcare professionals from Sabah, where they are still needed, to Peninsular Malaysia.

He also asks that more vaccines to be sent to Sabah where the vaccination centers are under capacity, and calls for a decentralized policy, which is far more effective for states like Sabah.

3:30 pm – Tony Pua (Damansara – PH) says the reason behind the government’s failure to contain Covid-19 is because the government was late in purchasing vaccines.

US and UK and even Singapore made orders in April, June, July. They got it early. But we waited. Waited for what?

Tomorrow, Science, Technology, and Innovation Minister Khairy Jamaluddin will take the floor to brief the lower house regarding the vaccination programme.

Damansara asked why was it so?

3:40 pm – Tan Sri Noh Omar (Tanjong Karang – BN/Umno) asks are the results of RTK-Antigen recognized and can it be used as a part of the SOP just as it is done at the parliament?

He also asks what has the Ministry of Health done in preparation for the end of the state of emergency.

3:50 pm – Nga Kor Ming (Teluk Intan – PH) calls for the resignation of the Health Minister after Malaysia has broken many Covid-19 records recently.

He also pointed out the injustice where vaccination centers in Perak had to close because of vaccine shortage, while at the same time, the private sector is permitted to sell vaccines at RM350.

Arau added that one of the issues that is holding Perlis back from entering Phase 3 of the NRP is the shortage of vaccine.

4:19 pm – Isnaraissah Munirah Majilis (Kota Belud – Warisan) asks why are there discrepancies in how Covid -19 is being addressed in Sabah versus peninsular Malaysia.

4:52 pm – Opposition parliamentarians demands that the speaker extend the parliament sitting so that all may voice their grievances.

5:00 pm – Health Minister Datuk Seri Dr Adham Baba (Tenggara – UMNO) says laws will have to change to address the contract doctor issue and the issue will be be brought up to parliament during the two years contract extension.

No action will be taken against those who participate in the contract doctor mass protest.

Dr Adham shared that the Ministry of Health has been sharing their data openly on GitHub recently. The resource can be found here.

On the issue of Ivermectin, Dr Adham said that the Ministry have given special permission for the drug to be used in off label randomised clinical test.

The result of the effectiveness of Ivermectin on Covid-19 patience will be known in September or October.

5:30 pm – Parliamentarians, in turn, continue to ask questions and share their grievances with Dr Adham who who answered them one by one.

5:45pm – The Parliament is suspended for the day and will continue tomorrow 28 July 2021 with.

Science, Technology, and Innovation Minister Khairy Jamaluddin is scheduled to address the lower house on Wednesday regarding the vaccination programme.