The public took to the streets in their cars to express anger over the government’s handling of the pandemic. 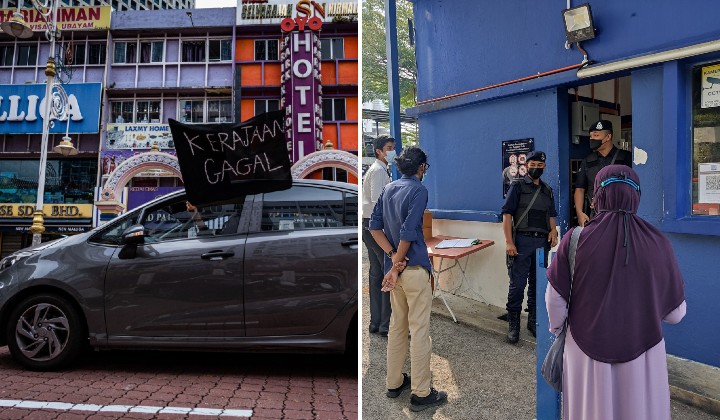 Over the weekend, a #Lawan convoy protest that happened throughout the country caught the attention of police, who have called in at least 20 activists and protestors for their involvement in the movement.

The black flag convoy was organised by Secretariat Solidarity Rakyat (SSR), ahead of another #Lawan rally scheduled for 31 July 2021.

On Saturday, 24 July, protestors in various states took to their cars to rendezvous at meeting points with large black flags.

More than 30 participants of #Lawan Convoy got called up by police in various states. The price that we need to pay for expressing our disappointment towards the failed governance. #SemuaSalah pic.twitter.com/TzV71gDoJJ

The #Lawan movement is an expression of public anger protesting the “failures and mishandlings of the pandemic by the government”.

Stay safe. Pay mind to the rules and call the number given for legal aid if you’re being reprimanded or held by the authorities.

Join https://t.co/bt0lujagNZ for instant updates for everything #Lawan

The day before that, the police warned that stern action would be taken against those who participated in the convoy, as well as the July 31 rally to indicate objection towards the government.

As such, after the convoy, more than 30 participants and organisers were called up for investigations regarding adherence to the SOPs.

However, after six hours of questioning, the protestors were released.

After almost 6 hours of questioning, the #LAWAN protestors are out!

A separate police report not related to #Lawan was lodged over the government’s alleged mishandling of the pandemic as well, led by activist and lawyer Ambiga, Datin Marina Mahathir, and 7 opposition MPs.

READ MORE: Police Report Over Government’s Alleged Mismanagement Of The Pandemic Lodged By MPs And Activists

What Happened At The #Lawan Protest?