The police said that they were found dancing and singing in a dark room. 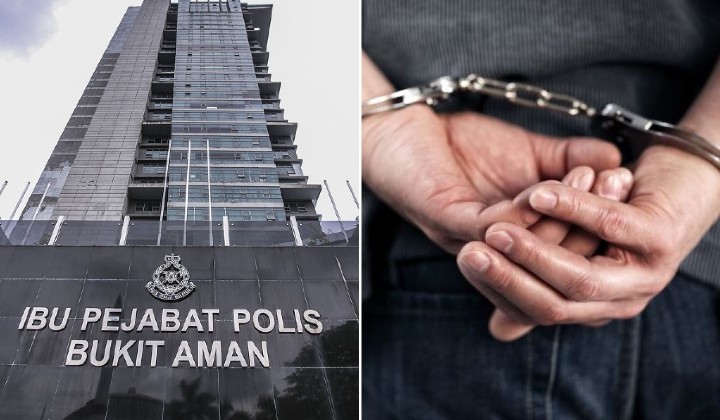 Four police officers (including a station chief) and 4 women were arrested recently after they were caught partying in a police station in Kajang, which was raided by Bukit Aman.

It’s reported that the raid was carried out by a team from the Bukit Aman Standards Compliance Integrity Department (JIPS), at 6pm yesterday, after receiving information from the public.

During the raid on the station, some of them were believed to be dancing while entertaining with liquor and drinking ketum water in a room on the second floor of the station.

It was a party

Based on reports, the four police officers and four women were found dancing and singing karaoke in a dark room with rotating lights that look like those found in a disco.

An Officer in-Charge of Station (OCS) with the rank of Sub Inspector, two Corporals and a Support Corporal as well as four women civilians aged between 21 and 37 years were detained.

They also seized five bottles containing ketum as well as pornographic pictures featuring one of the officers with one of the women.

Action to be taken

The raid was confirmed by Bukit Aman Integrity and Standards Compliance Department (JIPS) director Datuk Azri Ahmad who also said that arrests were made because it was a clear misconduct.

The arrests were made by officers and members of JIPS Bukit Aman after finding that the action clearly violated the SOP. We will not compromise with any party if they are found to be violating the rules or SOPs set.

Currently, he said, further investigations are underway including taking action under Section 269 of the Penal Code for negligent acts that may result in the transmission of any infectious disease that could be life-threatening.

After the news broke out, netizens were both surprised and bemused at the situation, saying that it’s unusual that those tasked with upholding the law would act in such a manner.

Am I laughing at PDRM for throwing an absolute fail of a rager party during COVID-19, yes I am.

Am I judging PDRM for throwing a rager during COVID-19 with ketum, karaoke & gambar lucah, yes I am.

Hope you don't treat budak party mcm sampah next time, that's all I can say

Others were more supportive, saying that it’s good that other police officers acted accordingly and commended those who conducted the raid for their honesty in doing their work.