Overcrowded prayer ceremony and feast investigated by the police during Hari Raya. 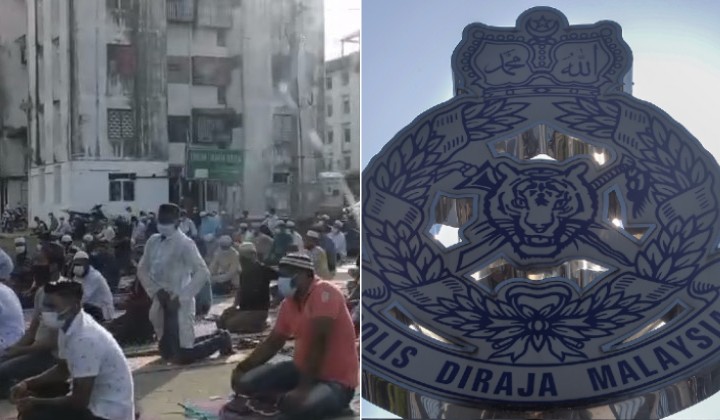 The incidents happened in a few states and action has been taken by the authorities.

The biggest case has resulted in 49 men being arrested after a video that showed hundreds of individuals violating SOPs by having Aidiladha prayers at an open area and roadside of Surau Taman Pelangi, Jeru, Penang went viral recently.

The police said that investigations would be conducted under Sections 269 and 270 of the Penal Code.

NST reported that the Magistrate’s Court has granted a four-day remand against 48 Bangladeshi men and a three-day remand order against a 64-year-old local man.

Reports say that they were praying in the area because the surau management did not allow them inside after reaching the maximum capacity of 100 people.

The case has been handed over to the Inspector-General of Police Datuk Seri Acryl Sani Abdullah Sani who will brief Home Minister Datuk Seri Hamzah Zainudin.

Bernama stated that the Home Ministry has requested the Penang police chief to provide a detailed report and explanation as soon as possible after the incident went viral.

Meanwhile, 30 foreigners and a local woman were arrested for attending a feast in conjunction with Hari Raya Aidiladha at a house in Taman Selayang Utama, Batu Caves.

Gombak Police Chief ACP Zainal Mohamed Mohamed was quoted by Bernama saying that the 29 men and two women aged 20 to 40 were arrested in a raid at about 10am after the police received a public tip-off.

Also, a man was fined RM2,000 after violating standard operating procedures (SOP) by visiting a grave in conjunction with Aidil Adha.

Jempol District Police Chief, Superintendent Hoo Chang Hook was quoted by Berita Harian saying that the 21-year -old man was detained at the FELDA Palong 12 and 13 Islamic Cemetery in Negeri Sembilan at around 11 am.

The police also said that the man came with his two nephews.

Mother Misses Family Vacation After Forgetting To ‘Check Out’ In MySejahtera